Each Verdict MMA Tournament is based on a single mixed martial arts (“MMA”) event consisting of multiple individual matches taking place on the same day. Each Verdict MMA contest participant (“Participant”) assembles a virtual team of real-word MMA fighters (“Fighters”) who are competing in real-world matches at the featured MMA event. When selecting each Fighter, the Participant also predicts the manner in which that Fighter will win (knockout, submission or decision) Each virtual team’s roster consists of a predetermined number of Fighters, handpicked by the Participant.

For each contest, all Participants select from the same pool of available Fighters. There are no restrictions on which Fighters can be selected to any roster, and there is no maximum or minimum number of rosters to which any real-world fighter can be selected. Therefore, when a Participant selects a certain Fighter, the selected Fighter is still available to any other Participant who wants him or her.

The Verdict MMA XP System is based on statistical results achieved by the Fighters, and contest results are determined by the total points accumulated in aggregate by each virtual team. Each contest closes after all matches are complete, and the Participants place in the order (from most to least) of total points accumulated by their respective teams. The scoring system is as follows:

Knockout - The number of points for a knockout varies from Fighter to Fighter. For each Verdict MMA contest, the number of points per knockout per fighter is established before the contest begins, is made known to each participant upon building his or her roster, does not change once the contest is open for entry and is the same for each participant.

Decision - The number of points for a decision varies from Fighter to Fighter. For each Verdict MMA contest, the number of points per decision per fighter is established before the contest begins, is made known to each Participant upon building his or her roster, does not change once the contest is open for entry and is the same for each Participant.

Round - Participants predict the round in which each of the Fighters on their roster will win his or her fight and earn 100 points for each accurate round prediction.

Survivor Bonus - Each Fighter earns 100 points for every round that he or she completes. If a match does not go the distance, then the match winner earns the number of points he or she would have earned if the fight went the distance, and the loser earns points only for rounds he or she actually completed.

Boosts - Each Participant can “Boost” the point value of certain accomplishments, at the Participant’s discretion, for the Fighters and terms (knockout/submission/decision/round) in which he or she has the most confidence. When a participant applies a Boost, the points available to the respective Fighter for the relevant terms increases by a predetermined amount, enabling the Participant to capitalize on his or her confidence in his or her predictions. Each Participant has a limited predetermined number of Boosts applicable per contest, and because fewer points are originally obtainable through Fighters who are ranked higher, the Participant’s ability to predict successful performances by lower ranked Fighters greatly increases his or her chances of winning the contest.

Following is an example of what the Participant sees when building his or her roster: 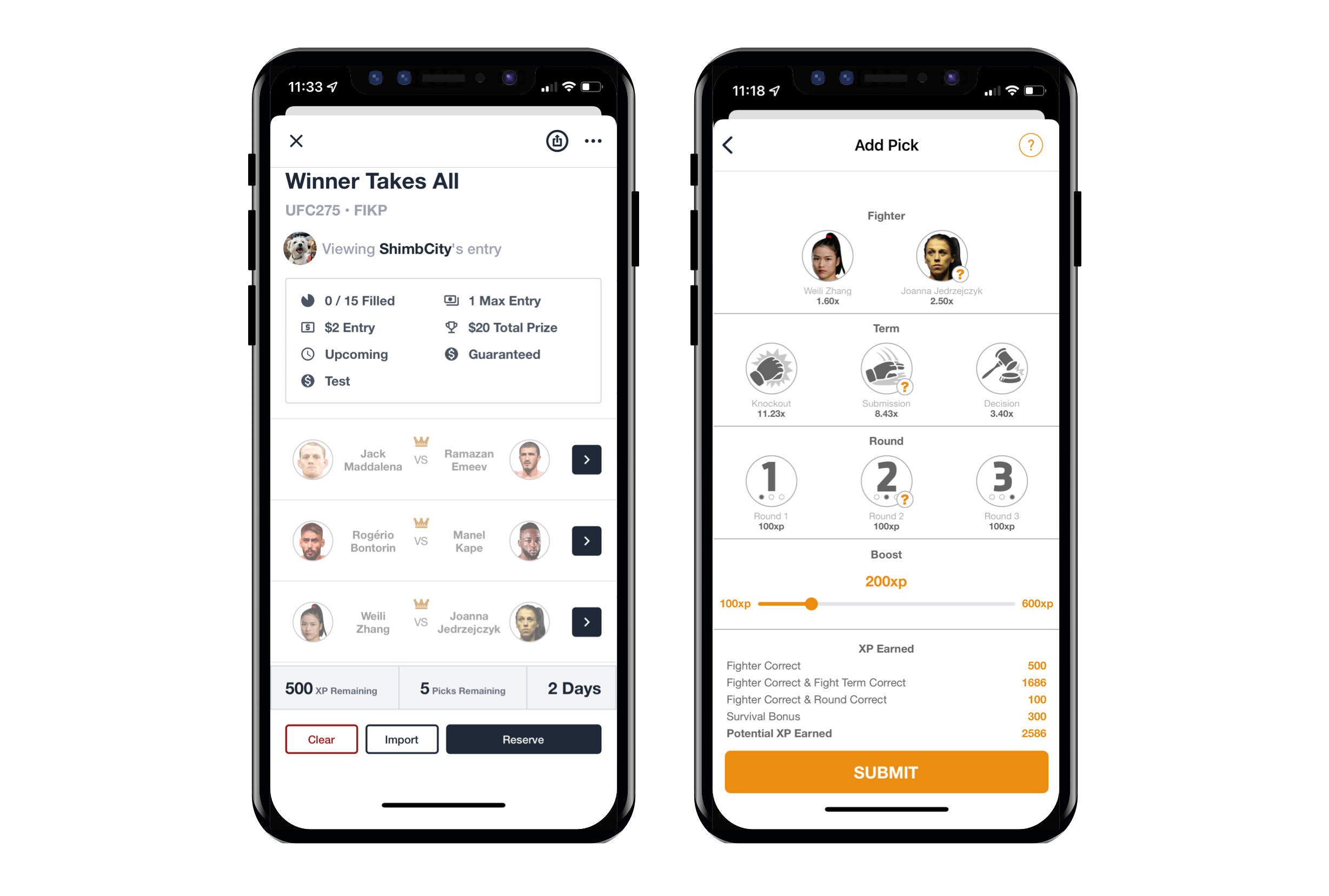 Please see our Terms of Service for information regarding eligibility to participate in the Verdict MMA contests.

Engaging in behaviors detrimental to Verdict MMA or to other Participants in the Verdict MMA contests may result in the suspension of some or all functions associated with your account.

We may require users to change their usernames in cases where the name is offensive, promotes a commercial venture or misrepresents another party. The requirement to change will be determined at our sole discretion, and if requests are ignored, we may change your username.

Experienced players are tag after participating in 50 tournaments

Each Verdict MMA contest has a predetermined prize pool. Any contest labeled "Guaranteed" shall run and payout regardless of how many entrants participate. For contests requiring a specified number of participants, if the target number of participants is not reached before the start of the contest, the contest will not take place and entry fees shall be refunded. The names, descriptions, entry fees, maximum number of entrants, total prize and payout structure may change from Contest to Contest.

Picks are locked when the first match of the respective Contest begins.

The maximum number of entries varies from Contest to Contest.

If an MMA event is cancelled or postponed, all entries into contests featuring matches from that event shall be cancelled and refunded.

If an MMA event is cancelled prior to completion of all the matches, all contest entries will be cancelled and refunded. If an event is suspended or delayed, we may, in our sole discretion, allow contests to remain live until the event is completed.

You can withdraw funds from your Verdict MMA account at any time. To withdraw funds, you must first go through a customer verification process via Persona. Once verification is successfully completed, you can enter an amount less than or equal to your withdrawable balance and select a desired withdrawal method. We conduct anti-fraud checks on playing patterns and deposits prior to processing withdrawal requests and reserve the right, at our sole discretion, to suspend or cancel withdrawal requests in the event that we find patterns indicating the possibility of fraud. If you received bonus funds when depositing funds into your account, you must pay an amount in entry fees equal to or more than the bonus amount before you can withdraw such funds. We reserve the right to refuse any request to withdraw bonus funds that were not used as required.

You may deposit funds into your account using Nuvei. To deposit funds, go to our deposit flow and enter the desired deposit amount. You can then select a desired deposit method. Your deposit limit can be adjusted from your settings. We reserve the right to limit the amount of money you may deposit in certain circumstances. We may restrict deposits for residents of certain states in order to comply with the laws in such states.

We settle each contest as soon as possible after the last fight is completed. If there is difficulty obtaining official results or issues with scoring, a contest may be settled the day after the fights take place.

After each fight has ended, we receive the final results and settle all the contests. If the results are revised after they have been released, the Verdict MMA scores will not be updated, and the settlements will not be revised. In the event that a correction is necessary after a settlement due to a problem with the data feed or the settlement process, however, the settlement may be cancelled, and games resettled correctly.

If a fight is called off due to a doctor’s stoppage or corner stoppage in between rounds, the fight will be declared a TKO within the most recent round as per the official ruling.

Verdict MMA may periodically experience periods of outage or slow performance. These can result in the inability to access and/or use the service. If you are unable to access or use the service, please report the problems by emailing us at [email protected].

We reserve the right to cancel contests at our discretion without any restrictions. This would be done only as necessary to preserve the integrity of the contests.