3 UFC Middleweights Who Will be Ranked in 2023

The last two years have welcomed some of the most exciting middleweight prospects that the UFC has seen in a long time. After a just a few years in the promotion, Alex Pereira has taken the division by storm and has shown (circumstances aside) how quickly a hot prospect could rise up the division. There are a littany of hungry killers following his lead, and we're going to cover some of the most promising ones. Let's get it going.

The middleweight division has plenty of killers on the come-up, but the first fighter on this list has to be Khamzat Chimaev. The Swedish workhorse has steamrolled his competition up until this point, going 6-0 in the UFC. While Khamzat’s last venture into the middleweight division came against Gerald Meerschaert in late 2020, recent weight-cut issues have foreshadowed a return to 185. Khamzat would likely face a top-10 ranked opponent in his first outing – even a solid losing performance should solidify his spot in the rankings. In reality, the more enticing question about Chimaev is whether or not he will get a title shot by the end of 2023. Anthony “Fluffy” Hernandez earned his way into the top three of this list the hard way. In early 2021, he submitted multiple-time jiu-jitsu world champion Rodolfo Vieira with an arm-in guillotine, which would be a feather in any fighter’s cap. Even 14th-ranked Chris Curtis had to take Vieira to a decision. In late 2022, he battered Marc-André Barriault for three straight rounds before submitting him, leaving no doubt that “Fluffy” is ready for higher-level competition. While this division is littered with talent, it’s worth noting that Hernandez was scheduled to replace Chris Curtis (and then Kelvin Gastelum) in a fight with the ranked Dricus Du Plessis earlier in 2022, meaning the UFC is willing to give him the opportunity when it arises. The final spot in the top three goes to the most un-killable fighter on the list – Gregory “Robocop” Rodrigues. “Robocop” has been on an absolute war path since entering the UFC, going 4-1 with three knockouts. His last fight displayed a level of toughness worthy of his nickname, where he took a devastating knee to the face from Chidi Njokuani. Rodrigues was left with a splitting gash in the middle of his face, but he kept coming forward to rally for the finish. “Robocop” will fight longtime veteran Brad Tavares in early January – while Tavares sits on the outside of the rankings at present, he was very recently ranked at 15, meaning a win by Rodrigues would put him on the precipice of a number next to his name. Having fought seven total times in the last two years, we can expect Rodrigues to get back in the octagon soon after the Tavares fight, with the rankings in his sights. Rodrigues after his comeback win against Chidi Njokuani. Photo by Yahoo Sports.
ADVERTISEMENT

With a promotion record of 8-2, Brendan “All In” Allen has paid his dues in the UFC. As such, he will be rewarded with an opportunity at the rankings against André Muniz in February. His recent first-round submission of Krzysztof Jotko this past October is just one of the 11 submission wins on his record. While his physically imposing 6’2” frame can produce some power punches, Allen is a clear specialist. His fight with Muniz is extremely intriguing on paper, featuring the two best jiu-jitsu players in the division. Both fighters have a great chance at getting their hand raised, and with an 11 next to Muniz’s name, a convincing win could entrench him in the midst of the rankings. However, given the stylistic matchup, this fight will more likely play out in one of two ways – a lower-level striking affair between two evenly matched grapplers or a back-and-forth grappling frenzy that ends in a decision. Based on these assumptions, combined with the fact that Allen was knocked out by 14th-ranked Chris Curtis in 2021, it’s difficult to envision a future in which Allen keeps a ranked spot, even with a win. The Louisiana native has always been active, though, so maybe two strong wins in 2023 would be enough. When you think of Dagestani fighters representing other countries, you probably think about Muhammad Mokaev, but there’s actually a second one at 185 who should be on everybody’s radar. Representing Germany, Abus Magomedov has only fought once in the UFC so far in an all-German matchup against Dustin Stoltzfus. Magomedov made quick work of his countryman, finishing him in just 19 seconds. At 25-4-1 and at 32 years old, Magomedov is fully in his prime and ready to make a run; the question for this man is when, not if. His placement as an honorable mention comes simply due to his fighting activity and due to only having one UFC fight under his belt. Magomedov gets a good step up in February when he faces Gerald Meerschaert. GM3 is known to be a slow starter, and with a wealth of first-round finishes, we may very well see a repeat of the Khamzat performance that we saw in 2020. If lightning does indeed strike twice, it wouldn’t be a surprise to see Abus get fast-tracked, but with that last name, he may have a hard time finding fighters who will be willing to sign the contract. The UFC should target a matchup with new signee Ikram Aliskerov (who barely missed this list) in his next fight, win or lose. 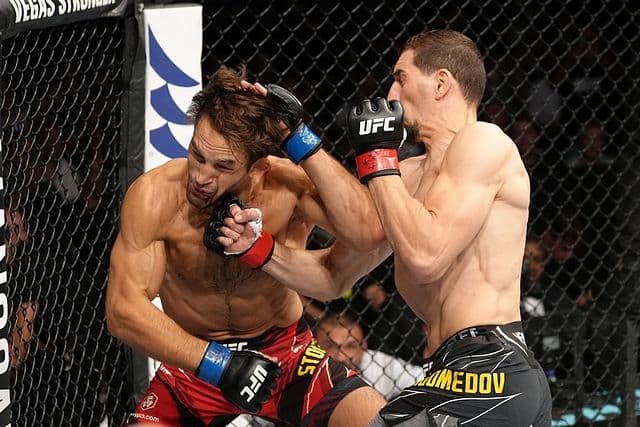 One of the latest victims of being pushed too soon into deep waters, Edmen Shahbazyan was finally able to get back in the win column this past December with a second-round KO against Dalcha Lungiambula. After going 4-0 at the start of his UFC career with three first-round finishes, it looked like Shahbazyan would be a staple of the middleweight rankings. However, he would then go on a three-fight slide against all ranked opponents between 2020-2021, putting him outside of the rankings and at odds with his fight camp. “The Golden Boy” would then pick himself up and head over to Xtreme Couture in Las Vegas, where he took a year off to hone his skills and rebuild himself. In 2023, we can expect to see a continuation of the self-proclaimed “Edmen 2.0”. While he likely sits close to the top 15 with such high-level losses, the UFC will likely be looking to learn from their initial mistakes with Edmen and let him get a few more unranked wins before thrusting him back into the fire. Additionally, with all of the emerging talent in the division and a TKO loss from crucifix on his record, Edmen 2.0’s ground game still needs to be tested. We rarely see a 3-0 prospect garner the level of attention that Bo Nickal has gained thus far in his MMA career, but this guy is special. Hailing out of Penn St., Nickal is a D-1 wrestling national champion with heavy hands and jiu-jitsu skills to boot. Nickal obliterated his competition in or around a minute, and with a serious lack of high-level wrestling throughout the middleweight division, it’s safe to assume that this guy can do a ton of damage. With hypothetical talks of Nickal even posing a threat to current champion and kickboxing specialist Alex Pereira making the rounds, the entire MMA community has sky-high hopes for Nickal. He faces Jamie Pickett in march for his UFC debut, and with such a lack of MMA experience, it’s virtually impossible that we see Nickal get fast-tracked in the span of a year. 2024 would be a much more likely time for Nickal’s coming out party, and this guy could climb all the way to the top if he plays his cards right. 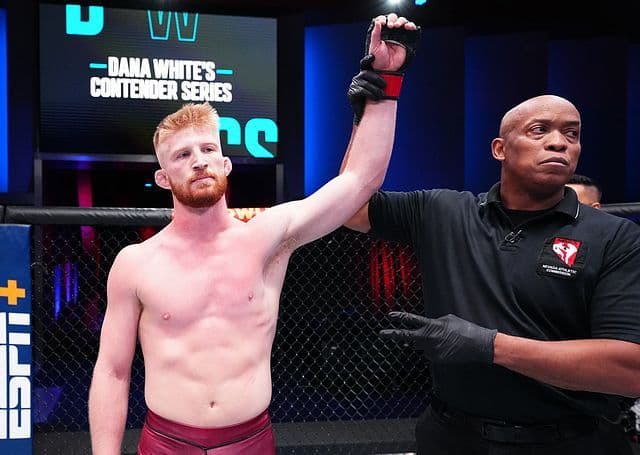 Speaking of Bo Nickal, the next spot goes to the only fighter in the division calling him out in Andre Petroski. The Philly product hasn’t stopped moving forward since his TUF loss to eventual winner Bryan Battle, building a 4-0 UFC record so far. Petroski is an explosive grappler with heavy hands (sounds like someone I just mentioned!), and has finished all but one of his UFC opponents. Petroski’s only apparent weakness is his tendency to gas out toward the later rounds of fights, but he displayed a much more measured approach in his recent decision win against Wellington Turman. He needs a few more fights against slightly higher-level competition, but Andre Petroski has all of the tools to make a run in the division. Expect him to fight Bo down the line. Petroski landing a left hook in his submission win against Hu Yaozong in late 2021. Photo by Chris Unger/Zuffa LLC.

Since his two DWCS wins in late 2021, Caio Borralho has been one of my favorite prospects to watch in the UFC. “The Natural” has three solid decision wins in the UFC so far against formidable competition. At 29, Borralho still has time do develop his standup skills, but as a lifelong pupil of Demian Maia, his ground game is legit. Borralho is still missing that signature win that fighters need to really make a push into the UFC rankings, but the Brazilian’s future looks bright. I wouldn’t be surprised to see him get his opportunity even earlier than 2024, given his activity (three fights last year), but there are plenty of other fighters on line as well.

Borralho during his second DWCS performance. Photo by UFC/Zuffa LLC.
HOME OF COMBAT
Submit picks and score rounds with the Verdict MMA app.
Download on the App StoreGet it on Google Play