Petr Yan makes his combat return against Merab Dvalishvili at The Theater at Virgin Hotels, Las Vegas, per LVRJ.

This 5-round main event takes place in the Bantamweight (135 lbs) division.

Petr Yan holds a professional record of 16-4-0 (8-3 UFC) and is currently ranked #2. His notable wins include Jose Aldo, Cory Sandhagen, and Urijah Faber.

Merab Dvalishvili holds a professional record of 15-4-0 (8-2 UFC) and is currently ranked #3. His notable wins include Jose Aldo, Marlon Moraes, and Cody Stamann.

Official odds have not yet been released.

Petr Yan's last fight took place at UFC 280 in Abu Dhabi vs. Sean O'Malley. The pair won Fight of The Night for their back-and-forth war, but unfortunately, that wasn't the main story leading out of it. Instead, the judges awarded O'Malley a highly controversial split decision that left fans and fighters alike in shock and confusion. The Verdict Scorecard awarded Yan every single round of the fight, and of the 26 media scorecards recorded by MMADecisions, 25 scored it in favor of Yan. 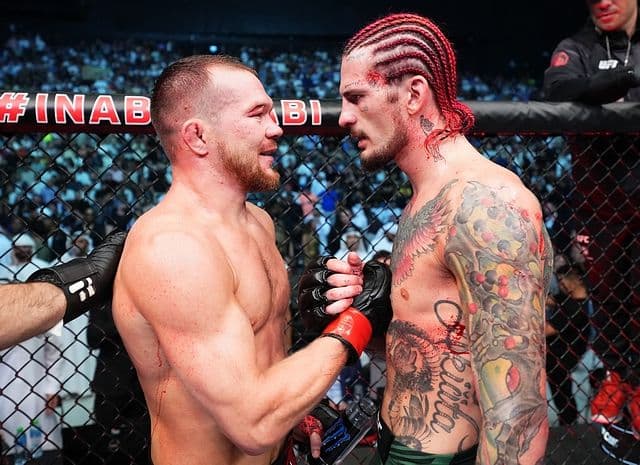 As of right now, Yan is 1-3 in his last 4, suffering a DQ loss to Aljamain Sterling after throwing an illegal knee to the head of a grounded opponent and then losing two controversial decisions in the rematch and vs. Sean O'Malley.

Merab Devishvili's last fight had far less buzz around it after the fact, as many saw it as a lackluster performance. He faced the legend Jose Aldo in what would be his retirement fight at UFC 278. Merab largely controlled Aldo against the fence for the fight, earning the unanimous decision win. Make no mistake, though, the Georgian is not shy of exciting fights, as seen in his Fight of The Year contender vs. Marlon Moraes at UFC at UFC 266.

This fight is Yan's chance to get back on track to reclaiming the world championship and Merab's most significant opportunity to challenge for it.

Who's going to get their hand raised and be declared the winner? Let us know your prediction in the comments below.