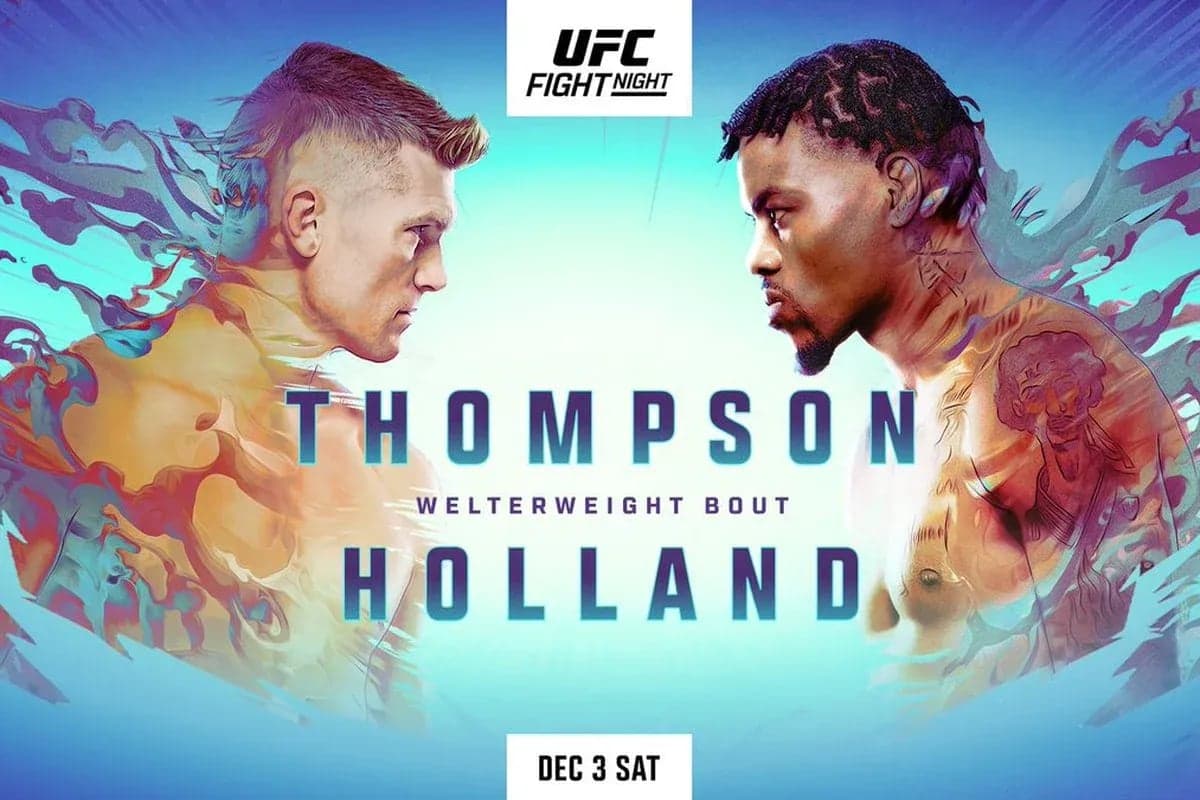 On deck for this weekend we have arguably the best fight night card of the entire year. In the main event we have a battle in the Welterweight division between two fighters that will put on a show for fans in Stephen Thompson and Kevin Holland.

The rest of the fight card is littered with elite talent and it is one you will not want to miss. I'll be giving you my best picks that will have you rolling in some cash on Verdict Tournaments come fight time. With that said, let's take a look at the picks.

To open the main card we have a Middleweight showdown between Eryk Anders and Kyle Daukaus.

Both Anders and Daukaus are desperately in need of a win here. Anders has been very lackluster with only 1 win in the last 3 years and has looked relatively off in his most recent performances. Anders is a thumper and packs some power but his inability to mix things up leaves a lot to be desired.

Daukaus is coming off of face surgery just about 3 months or so ago after getting his face shattered by Roman Dolidze. He has shown some promise when he first bursted onto the scene but since has been very inconsistent. He is able to mix his strikes well and blend them with his grappling when he's at his best.

Daukaus has the clear advantage in the grappling in this matchup and he would be wise to utilize that. Anders has the tendency to get backed to the cage and Daukaus will take full advantage of that. Being as Anders has shown to be durable only being finished twice in his 7 losses, Daukaus by decision is the way to go. 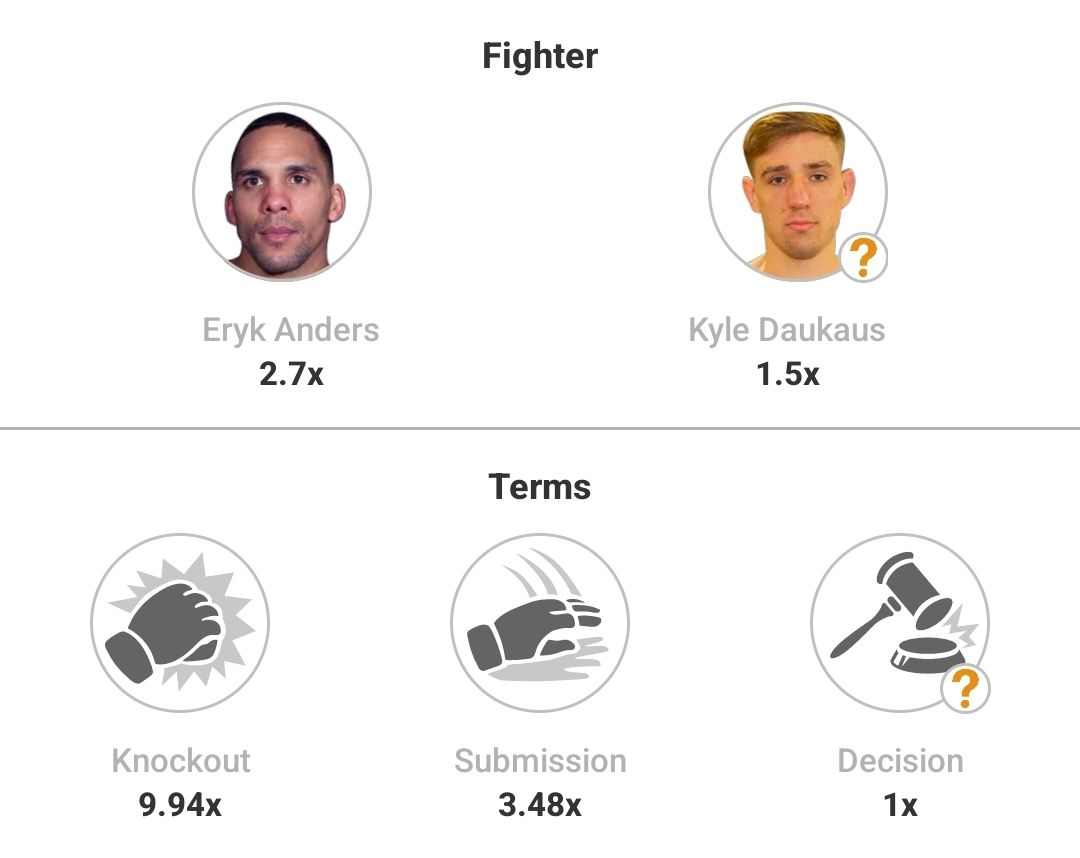 In the Middleweight division we have Jack Hermansson taking on Roman Dolidze on short notice.

Hermansson has been a mainstay in the top 10 of the Middleweight division for quite some time, beating the best of the best. In his most recent fight he showed there were levels to this as he took out the surging Chris Curtis.

Dolidze has been making strides winning 3-straight coming into this short notice opportunity. He knocked out both Phil Hawes and Kyle Daukaus enroute to his toughest opponent yet.

Hermansson is as solid as they come in all facets of the game. I thoroughly expect this fight to play a bit similar to the Curtis fight. He will be a bit better than Dolidze everywhere and if he could just avoid getting knocked out he should cruise to a unanimous decision victory and that's who I'm rolling with. 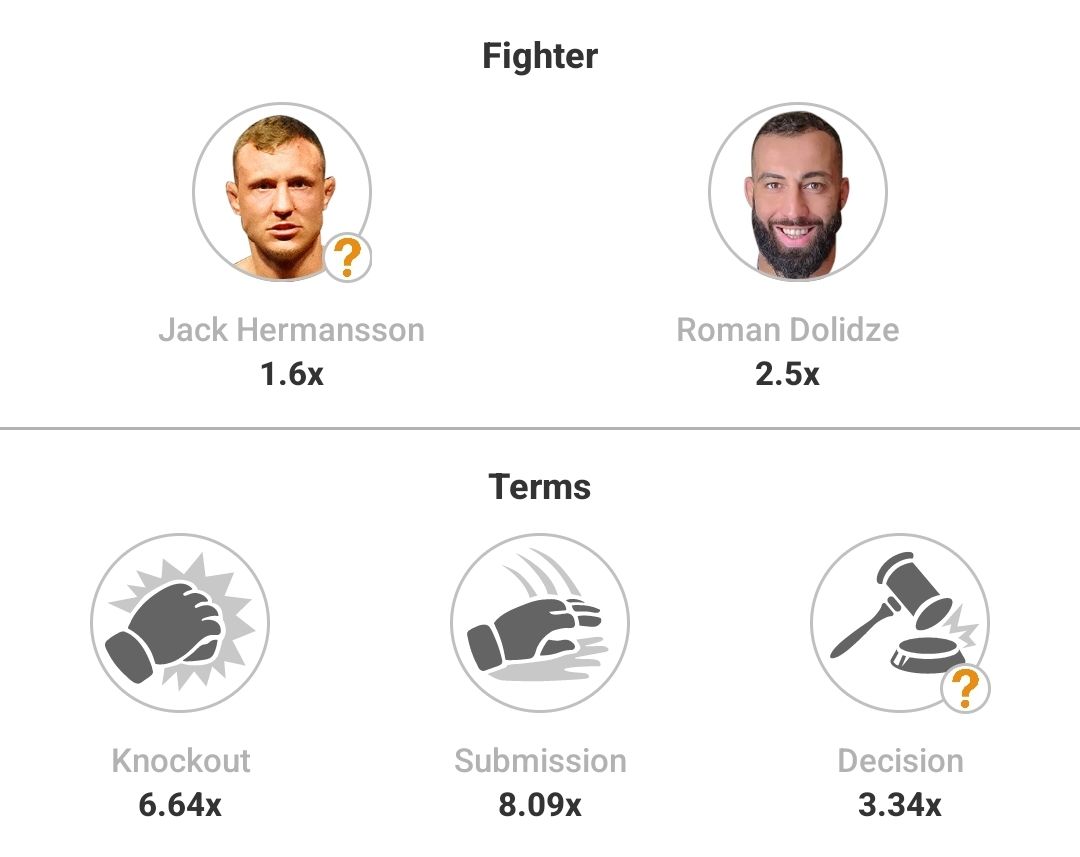 We have an absolute banger in the Heavyweight division in a fight between Sergie Pavlovich and Tai Tuivasa.

Pavlovich is coming off of his biggest win yet with a first round knockout of Derrick Lewis. He has some of the heaviest hands mixed with some of the best technical striking in the entire division.

Tuivasa is coming off of a very entertaining defeat at the hands of Ciryl Gane. He was the only fighter to really hurt Gane on the feet in his MMA career which should give him a ton of confidence coming into this fight.

The worry about Tuivasa is that he's coming back from a brutal beating just a short time ago. It's hard to gage how well his chin will hold up going against another heavy hitter in Pavlovich. Pavlovich also boasts a 10" reach advantage which should help keep Tuivasa at the end of his strikes. Ultimately I have Pavlovich getting the knockout early in round 1.

In the Flyweight division we have a great scrap between two game opponents in Matheus Nicolau and Matt Schnell.

Nicolau has been on an absolute tear ever since departing from the UFC and is riding a 5-fight winning streak. He's one of the most well-rounded fighters in the flyweight division and really has a chance to put his name on the map with big win here against Schnell.

Schnell is coming off of arguably of the craziest fights of 2022 that saw him submit Sumudaerji. He is a dangerous fighter no matter where the fight goes and his opportunistic style of fighting will need to be in full effect to keep his winning ways going.

Even though Schnell is as dangerous as they come, Nicolau is just a bit better everywhere than Schnell. Nicolau will be able to stay on the outside, keep his distance and land the harder and more damaging shots on Schnell throughout this contest. I fully expect Nicolau to run away with this to win yet another wide decision. 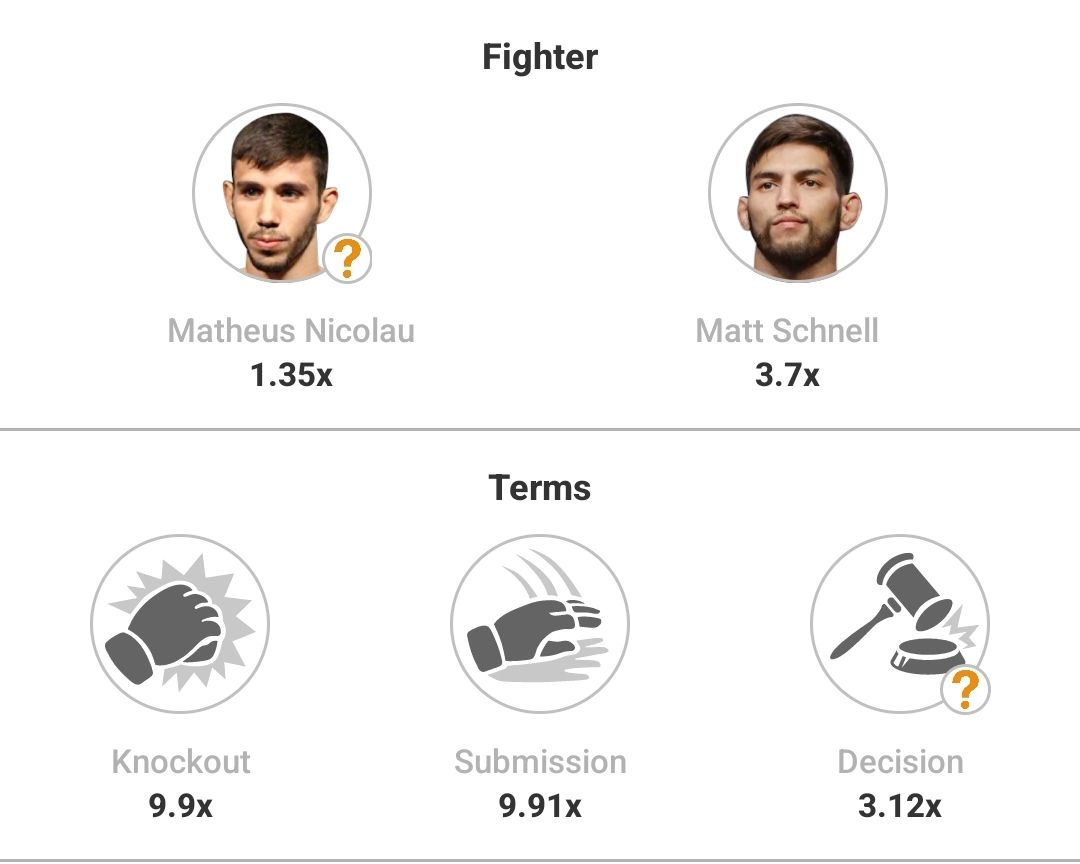 In the co-main event we have a barn burner in the Welterweight division between Rafael Dos Anjos and Bryan Barberena.

Dos Anjos is coming off of a 5-round war that so him get finished by Rafael Fiziev in the very last round. He's been an elite fighter in both the Lightweight and welterweight divisions for a while now and is looking to get back into the win column here.

Barberena is as tough as they come. He's been through a lot inside and outside of the octagon and his toughness is what people know him for. He may not be the best fighter in the UFC but he brings it in each and every fight.

Even though Dos Anjos may have lost a step he's still far better than Barberenain every facet of the game. He can utilize his underrated grappling in this matchup and potentially get the submission win. Ultimately Barberena is able to defend the submission attempts to get to the judges scorecards where he would lose via unanimous decision. 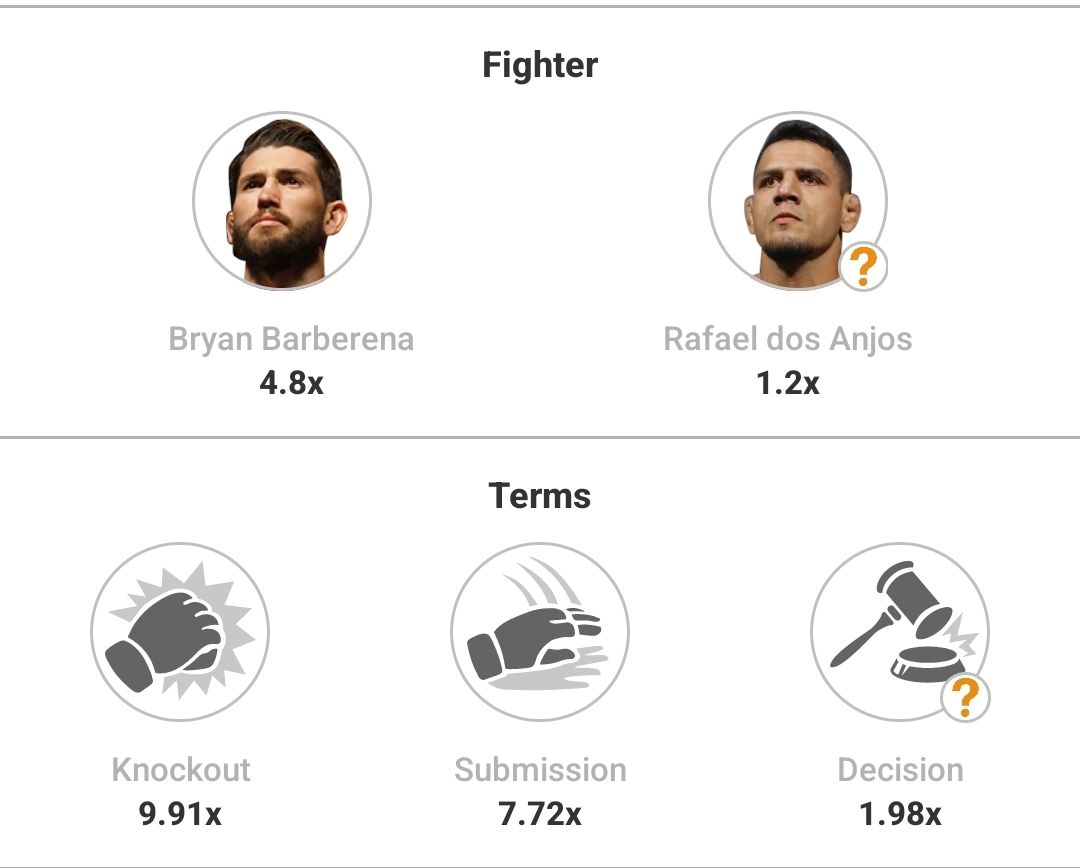 In the main event we have a great fight between two of the welterweight divisions best in Stephen Thompson and Kevin Holland.

Thompson is searching for his first win since 2020 and is returning to the octagon after a year layoff. Even though he may be declining with age he is still one of the elite strikers in the division. If Holland believes he can stand and strike with Thompsons for a full 25 minutes he has another thing coming.

Holland is one of the more exciting fighters to watch in the division. He's dangerous on the feet and on the mat. He will be smart to utilize that BJJ black belt of his as we know the glaring weakness of Thompson's game lies with his defensive grappling.

Even though Holland is in better form at this stage of their respected careers, I think this is a bad matchup for him. Holland isn't the type of grappler or wrestler that Belal Muhammad or Gilbert Burns is to take advantage of the grappling woes of Thompson. All in all Thompson does what he does best and that's stay at range and pick Holland apart enroute to a unanimous decision. 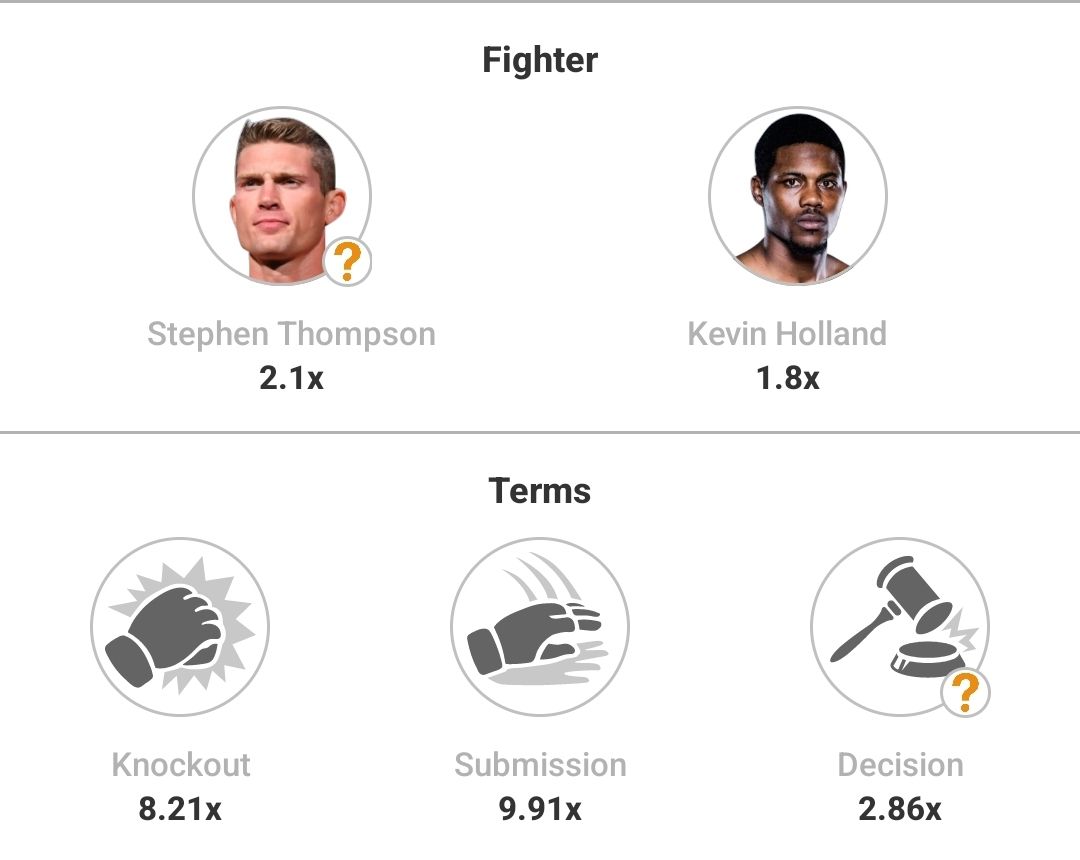