Kayla Harrison lost to Larissa Pacheco at the 2022 PFL Championships in Madison Square Garden. The fight was a grueling action-packed affair and as close of a contest as we've seen. Let's see if the judges got it right:

Harrison got off to a hot start, landing and then finding the judo throw. From the ground, she chipped away while Pacheco tried to find submissions and remain active from the bottom position. Not much worked for her as Harrison continued to control and land until the round ended.

Pacheco opened the round with a huge right hand, bloodying Harrison's nose. Kayla finds the takedown but also finds herself deep in a chokehold, barely escaping. They return to the feet and Pacheco continues to unload, stumbling Harrison. They hit the mat and Harrison looks for an armbar but gets nothing before the bell sounds.

Harrison shoots but gets countered with some heavy strikes. She shoots again and finds the takedown but Pacheco is still throwing from the bottom. She throws up a triangle that looks as tight as can be. However, Harrison's arm is out of position for the choke and Pacheco can't generate a strong enough squeeze. Kayla gets out and starts raining down strikes on a fatigued opponent from top position till the end of the round.

Harrison gets a takedown early but Pacheco reverses position and gets the back. Harrison now reverses and takes her back. They scramble again and Pacheco lands on top in side control. She goes to work landing heavy shots to the body and head as they return to the feet. Harrison shoots again but doesn't get it.

Harrison briefly gets the fight down to the ground but Pacheco bounces back up and starts teeing off with knees. Kayla shoots again but is eating big shots in the process. She gives up on the takedown and ends up giving her back too. Harrison reverses and gets on top but does nothing but eat shots from Pacheco.

That wraps up the fight review and scoring. Let's take a look at the Verdict Scorecard and see The Final Verdict. 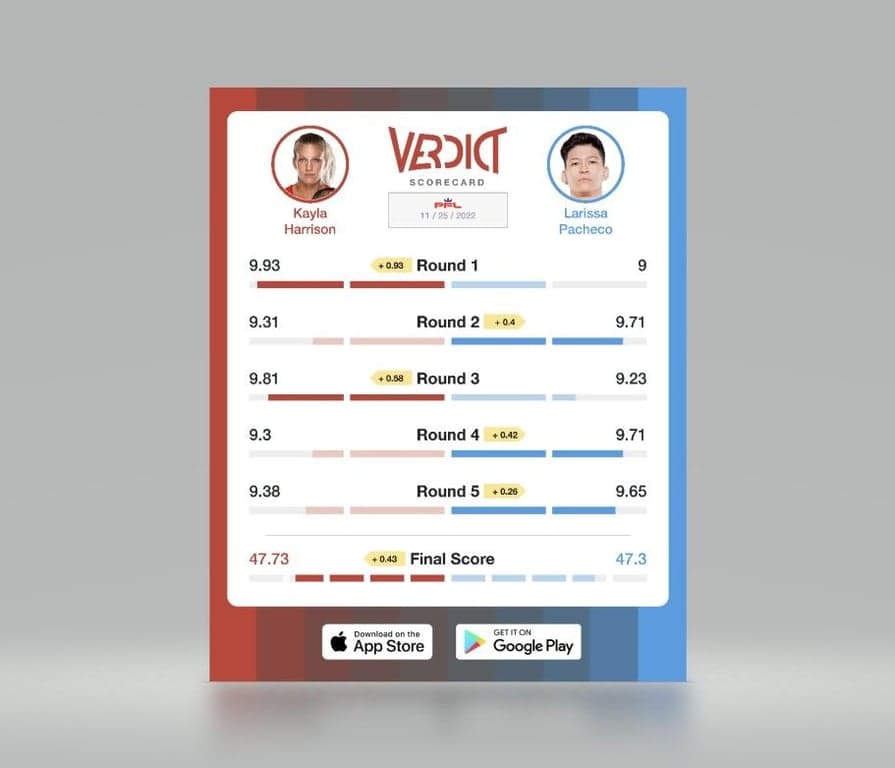 The judges agreed with the Verdict Scorecard on every round, calling the unanimous decision.

The Judges got it right. The fight was certainly close, but Pacheco did enough to win 3 out of 5 rounds.