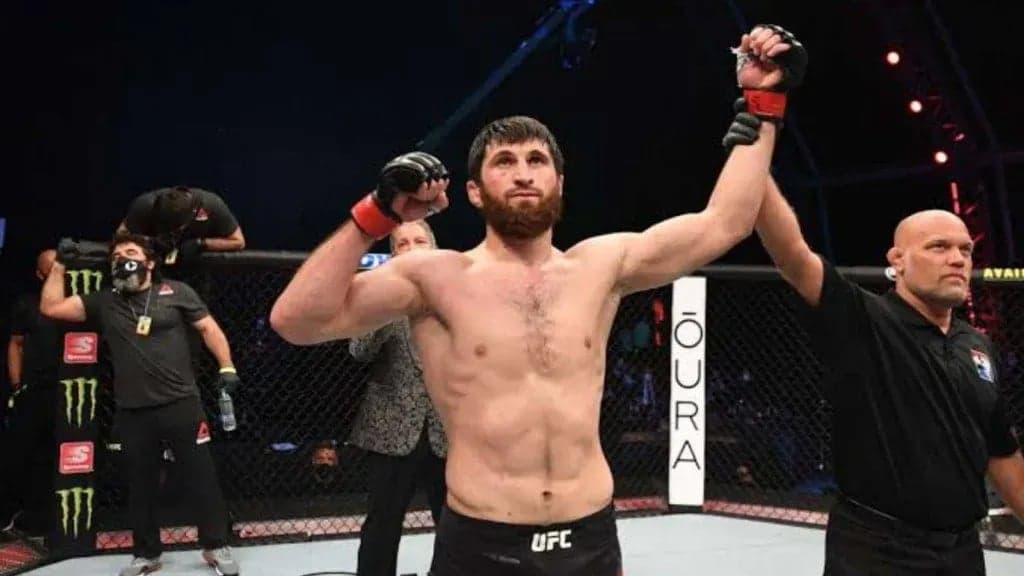 The UFC returns to the world's fight capital at T-Mobile Arena in Las Vegas, Nevada. United States to crown a new Light Heavyweight Champion of the world between Jan Blachowicz +245 and Magomed Ankalaev -286. This card features plenty of can't-miss matchups like undefeated Featherweights Bryce Mitchell +122 and Ilia Topuria -139, opening the main card so don't miss out.

The new main event for the Light Heavyweight belt features a former champ taking on who many have seen to be the future one in a great matchup. Jan Blachowicz has worked his way to another opportunity at the title; through his long UFC run, he has won fights using many different weapons. Magomed Ankalaev has been the boogeyman of the division for the last few years as he has used his powerful striking and heavy wrestling to dominate all his opponents.

I've got Ankalaev here, as he is just too good and only getting better compared to Blachowicz, who is up there in age.

Lightweights get bumped up to the co-main event here in a high-stakes clash. Paddy Pimblett has had an exciting UFC run so far, with him needing to come from behind in all three of his wins which he finished within the first two rounds using his excellent submission game and a surprising bit of power to help. Jared Gordon has had his ups and downs in the UFC, but his skill set is well-rounded, and he is no easy task.

If the odds had stayed where they were, I was leaning toward Pimblett; however, with the massive shift, I am taking Gordon as we have seen Pimblett struggle against mid-level fighters in his recent fights, and I have seen nothing to suggest him being worth this price.

A short notice matchup at Welterweight. Santiago Ponzinibbio is a dangerous striker who is creative and dangerous through all three rounds. Alex Morono steps up here and has good boxing, which earned him a win his last time out, although he was hurt badly and had to survive.

I'll go with Ponzinibbio in this one as I do not believe Morono can take his power, especially on such short notice.

Big time Middleweight matchup. Darren Till returns after partnering with Khamzat Chimaev to train; it will be interesting if he can reach the potential we saw in him early in his UFC career. Dricus Du Plessis has been a fun prospect to watch as he is not the most technical fighter, but he has tremendous power and is willing to commit to grappling exchanges.

I'm going to take Till as an underdog here as in Du Plessis' last fight, we saw him get caught with a lot of straight punches on the way in, and I see Till finding a home for his left hand repeatedly.

This is my most anticipated fight on the card as two undefeated level Featherweights clash. Bryce Mitchell has used his high-level wrestling to control opponents with relative ease. Ilia Topuria gets a massive jump in competition, which is likely best for the safety of unranked contenders, and he does so boasting one of the most dangerous offensive attacks in the UFC with his black belt that earned him many submissions before the UFC or his devastating power that has toppled his recent opponents.

I'm taking Topuria, and I'm taking him by knockout, as his grappling game is good enough to force this fight to take place on the feet for long portions. Mitchell has been backed up in striking before by Andre Fili, and if Topuria gets him good, he can take out anyone.

An absolute must-win matchup for these two Heavyweights. Jairzinho Rozenstruik is a dangerous striker with a lot of kickboxing experience, although he does not throw very high volume. Chris Daukaus is a fast guy for the division, although he has been knocked out in his last few fights.

I'll pick Daukaus as an underdog here, as he will be the guy throwing more volume, although I do not trust either guy very much.

A Bantamweight matchup here with a lot of intrigue behind it. Jay Perrin has lost each of his UFC fights thus far, although he has had to fight tough competition. Raul Rosas Jr. has made headlines for making it into the UFC at such a young age, and he did so primarily using his grappling skill.

I'm going to bet Perrin at this price as the skill level is pretty even, and with his experience edge, I could see Perrin taking over this matchup.

This should be an explosive battle here at Middleweight. Edmen Shahbazyan had a fast rise and a faster fall in the UFC but is looking to get back on track here as he has shown incredible striking, although his wrestling and cardio have yet to hold up. Dalcha Lungiambula is on a three-fight losing streak, although he still has shown dangerous power in those fights.

I like the change in camps from Shahbazyan, and I expect it to have great results for him on Saturday.

Much anticipated Middleweight battle between two names to watch in the division. Chris Curtis is a solid boxer, although he had a lot of trouble with the movement of Jack Hermansson his last time out. Joaquin Buckley has shown much in his recent fights to prove he is more than the knockout artist people know him as.

This fight opened at even odds and moved to Buckley as the favorite, and I agree with that as he has shown a more developed game and higher upside as a fighter.

Must see action at Featherweight here. Billy Quarantillo is a very high pace fighter with tricky grappling as well. Alexander Hernandez moves down in weight possessing immense power and a solid wrestling game.

I've got Quarantillo here, as it is an excellent matchup for him to use his pressure to overwhelm Hernandez.

A fun matchup between guys off Dana White's Contender Series here. Erik Silva has breezed through his last five finishing each of them in the first round by submission or ground and pound. TJ Brown is a strong wrestler with some solid UFC experience.

I'll lean with Brown here as Silva is very untested, and I think Brown can force this fight past the first round, which is a new game for Silva.

This exciting Flyweight matchup is almost certain not to require judges. Daniel da Silva has lost his first three UFC matchups within the first two rounds; however, he is still very dangerous as each opponent has had to weather the storm. Vinicius Salvador comes in off Dana White's Contender Series, having a very high finish rate on the regional scene.

I'll take Salvador in this matchup, but I am not eager to bet on either side, as this one could get wild and unpredictable.

A battle between undefeated Bantamweight prospects here. Cameron Saaiman comes in off an impressive win on Dana White's Contender Series in which he showcased his diverse skillset and potential. Steven Koslow enters his UFC debut having just six fights and winning each by first-round submission.

I'm taking Saaiman here as he has dealt with the tougher competition to prepare him for the UFC level.