The old dog's still got it.

UFC Orlando tied the historical record for most KO/TKO finishes on a card ever, with 8. Fans were treated to perhaps the best fight of the year in the main event, and so much more.

Let's see the results and recaps: 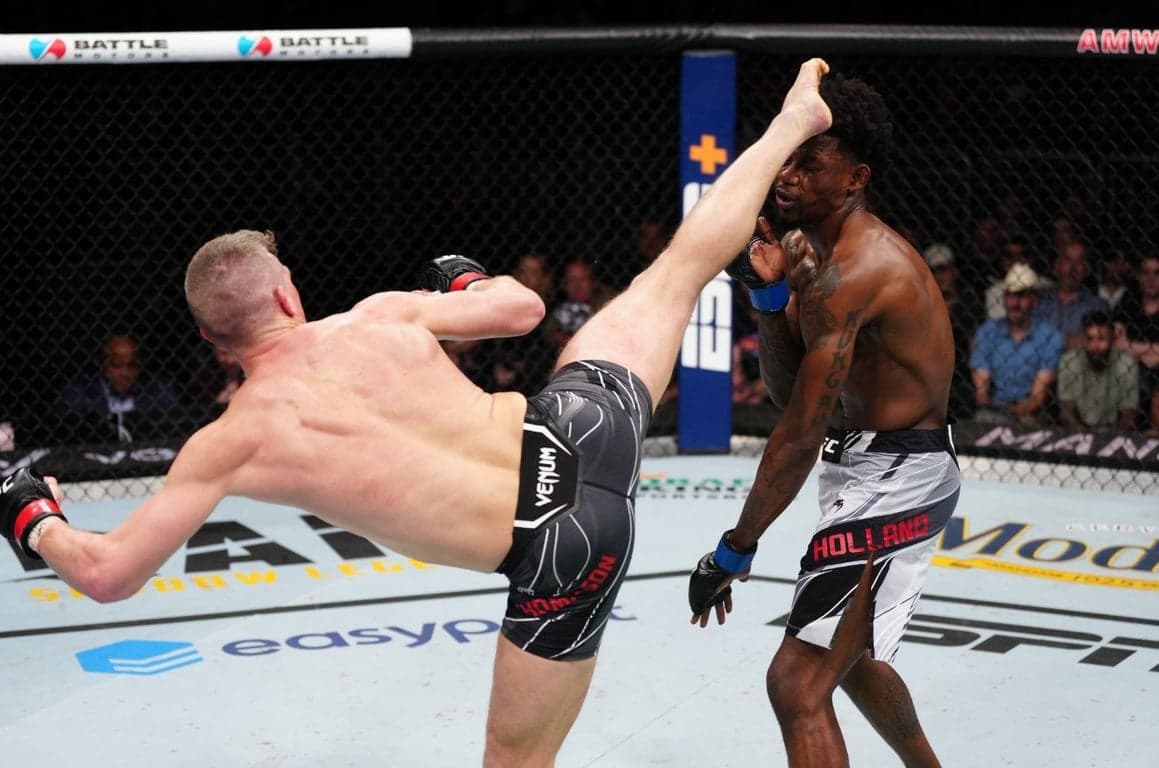 Wonderboy puts on a masterclass. Credits to: Zuffa LLC

Stephen 'Wonderboy' Thompson put on one of the greatest performances inside the octagon in recent memory. The two began swinging for the fences from the opening bell. Round 1 was closely contested but Holland landed the harder strikes and had Thompson hurt. From round 2 and forward was where 'Wonderboy' began finding his groove. He consistently backed Holland up with a swiss army knife of strikes and stumbled him on a few occasions. He began building up steam into round 4 where he started using head kicks for jabs. Holland, beaten, exhausted, and suffering an injured hand, did his best and barely survived a knockdown at the end of the round. Mercifully, his corner halted the bout on the stool and the fight goes down as a TKO win for 'Wonderboy.'

The former Lightweight champ, 'RDA,' meant business in his Welterweight return. He took on Bryan 'Bam Bam' Barbarena and put on a grappling masterclass. On 4 takedowns he nearly submitted Bryan just as many times. His foe survived the first but when round 2 picked up right where they'd left off, he was forced to tap to a rear-naked choke.

Nicolau fought out his UFC contract tonight in fashion. He took on Matt Schnell in a high-stakes Flyweight bout. Schnell looked to bring the fight to the ground but had nothing for his opponent. Nicolau, on the other hand, was precise and powerful with his strikes, picking his shots en route to multiple knockdowns that lead to the finish.

Pavlovich wants a title shot and is wasting no time getting it. He marked his 2nd knockout in a row under a minute tonight with a barrage of strikes. His punches with fast, accurate, and could not miss. The referee gave Tuivasa every opportunity to survive, but in the end, the Russian was too much.

What started off as an excellent showing for Hermansson ended disastrously. He accepted Dolidze on short notice when his scheduled opponent, Derek Brunson, was forced to withdraw. Hermansson looked every bit the 2:1 favorite he was until he initiated a grappling exchange in the 2nd round that saw Dolidze not only reverse the position and find full mount atop his back, but he also locked up Hermansson's leg in a calf slicer, completely immobilizing him. Punches rained down and it was only a matter of time until the referee stepped in.

Anders was the bigger, stronger, and more equipped man tonight. Daukaus returned just a few months after being knocked out by Roman Dolidze, and he paid for it. He went 0/8 on takedown attempts and found himself on the wrong end of several heavy shots. Not enough can be said about the underdog Anders' performance tonight leading up to the finish.

This was our pick for The Sleeper Fight of The Week, and it delivered. The two swung wild and fast from the start, but Rowe's shots had more impact all throughout. He used his range and power to pick at the openings Price presented. Up 2-0, he was nearly finished in the 3rd before coming back to earn the TKO himself.

Hill found herself on the right side of a decision tonight as she sent Ducote back to the start of the line in a shutout performance. Her volume, accuracy, and experience paid dividends toward her unanimous decision win.

Holtzman started the fight strong with his striking and power, taking round 1 on all 3 scorecards. Like many of his prior fights, however, Guida picked up the pace as the fight went on. He used his wrestling to overwhelm Holtzman and at 40 years old, picked up his 18th UFC win.

This fight was a fun one in the 155 lbs division. Diakiese came out showing his patented striking style that he was long known for and had early success during the fight. It was in rounds 2 and 3 that Johnson began to time his wild moves and counter well, eventually turning on the pressure to win the decision.

Jonathan 'JSP' Pearce put the division on notice with a dominant win over one of its finest veterans. He showcased the crisp striking he'd been working on over the last few years and mixed in the grappling well. The damage piled on Elkins' face and the bout could have easily been stopped.

Natan Levy put on a masterful performance, especially in the 1st round. He dropped Valdez and then again with a hook kick. His striking was levels above and his well-roundedness showed as well. He secured the win with a takedown and some control time in the 3rd.

The debut of Francis Marshall in the UFC is one fans will remember. Showing clear signs of early jitters, he did eat a few shots in the fight. After securing a takedown and seemingly finding confidence in his abilities, he let it all loose and dropped Rojo in the 2nd, finishing him off with brutal ground and pound.

This fight was a banger to start the night off. Nunes sat Jauregi down in the 1st, letting her opponent know she wasn't in for an easy time. Jauregi welcomed it with open arms and swung back in round 2, finding two knockdowns before securing the TKO finish.

This card was everything fans imagined and more. It showcased blossoming talent, top contenders making their mark, and old dogs showing that they aren't done just yet.