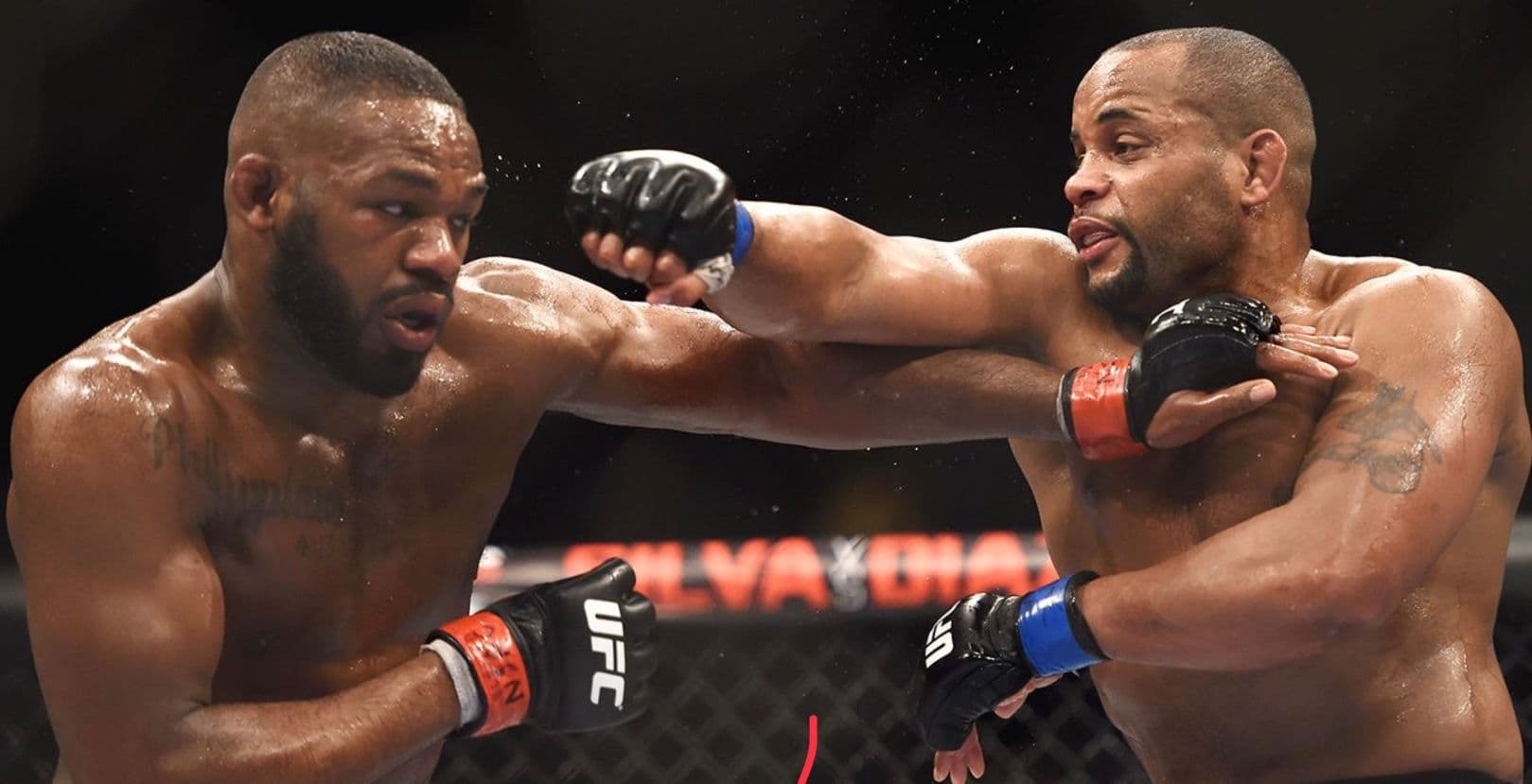 The History of Jon Jones and Daniel Cormier

One of the most historic beefs in MMA's history started with a straightforward phrase; “I bet you that I could take you down.” Jon Jones told Daniel Cormier backstage at UFC 121 in 2010. Unsurprisingly, the former Olympic wrestler Cormier took offense to this, and their rivalry was born. While their squabbles wouldn’t hit the cage for another five years, their distaste for each other would be firmly established.

Before starting his MMA career, Cormier was a credentialed amateur wrestler. He was an All-American at Oklahoma State before joining the United States Olympic Team, which he was a part of in 2003 and 2007. Unfortunately, DC would be removed from the team in 2007 due to kidney failure, and he began his MMA journey in 2008. Four years later, Cormier would win the Strikeforce Heavyweight Grand Prix as an alternate and would enter the UFC the following year in 2013. 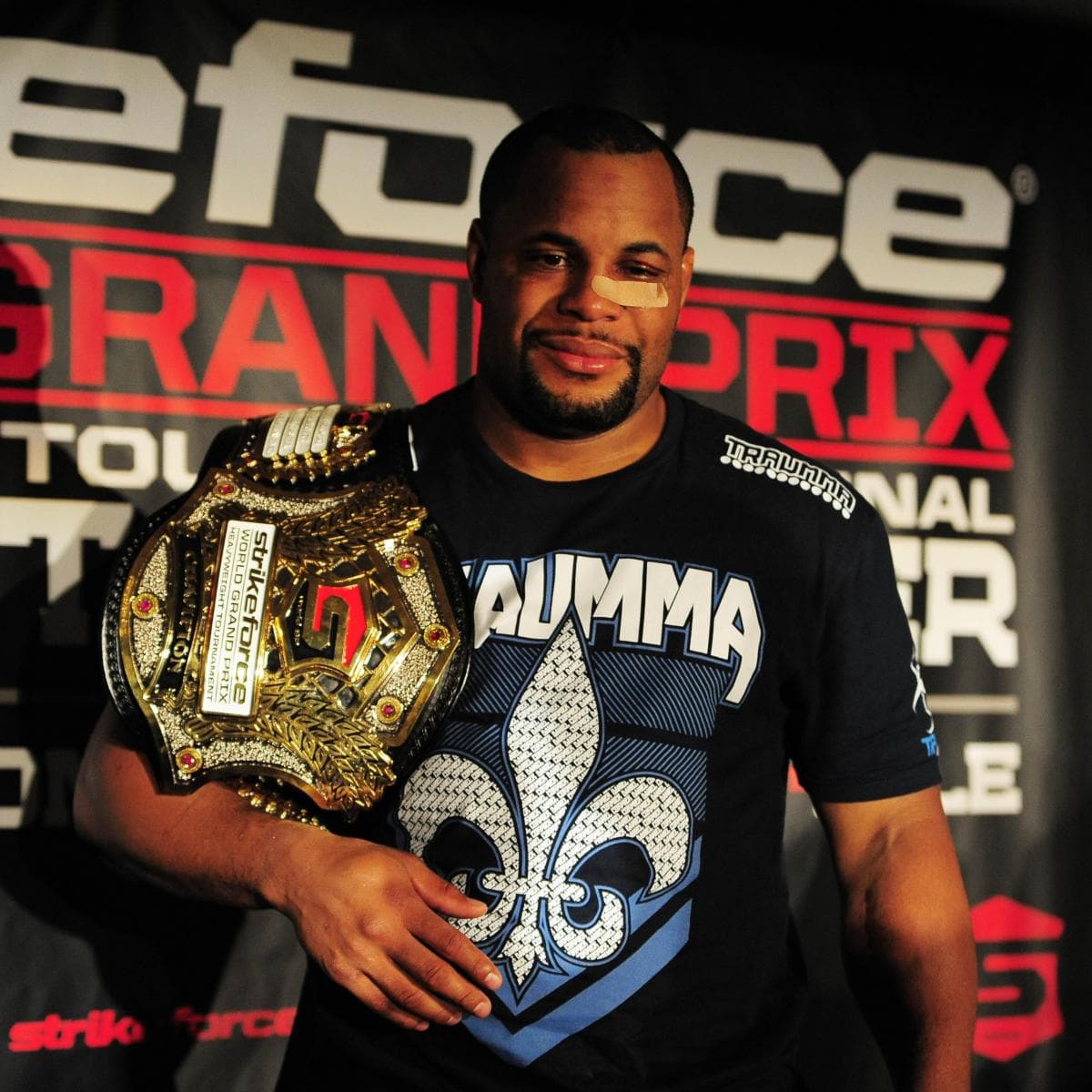 Jon Jones entered the UFC in 2008 with a professional record of 6-0 and would have his first fight in the promotion before his 21st birthday. He would go on a tear of 6 wins (and one questionable DQ loss to Matt Hamill) before defeating Shogun Hua for the title and becoming the youngest UFC champion of all time. Jones would hold onto the Light Heavyweight title from 2011-2015 when he first collided with Cormier in the octagon. 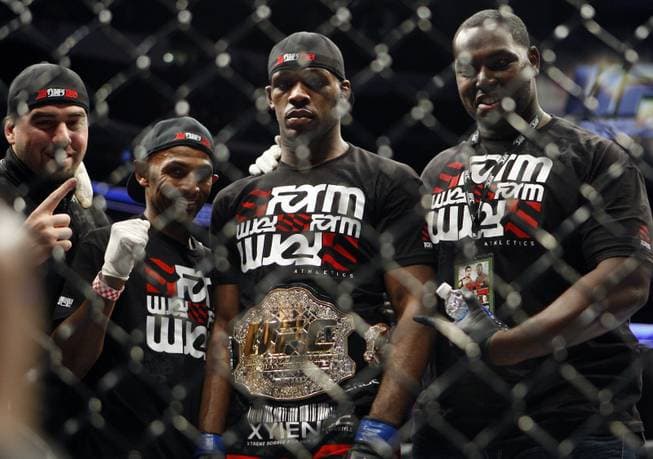 Initially, their beef was rather superficial as Cormier fought at Heavyweight, but in 2014 DC would come down to Light Heavyweight, putting together two wins over Patrick Cummins and Dan Henderson. Jones was coming off his Hall of Fame bout with Alexander Gustafsson and was initially supposed to rematch him, but Gustafsson would have to pull out with an injury, thus giving Cormier the title shot. In the build-up to this fight, their rivalry would reach mainstream awareness, starting with their famous scuffle at a UFC media day in August of that year.

The two faced off at a press event at the MGM Grand, and things went awry relatively fast. Jones got right in Cormier’s face, leading Cormier to respond with a hard shove. Jones stormed back at Cormier, leading to them getting tangled up and knocking over numerous people and the fake wall behind the stage. When the dust had finally settled, it was clear that the bad blood between these two had boiled over and would only continue to do so. Jones and Cormier later did an interview on SportsCenter, in which they had to be kept in separate rooms. The two would exchange words when they believed cameras weren’t rolling and the seriousness of their beef was truly exposed. Jones would drop a now infamous line, “Hey pu--y, are you still there?” Things would only spiral out of control from here, with Cormier telling Jones, “I wish they would let me next door so I could spit in your f--king face.” Jones warmly responded, “...I would literally kill you if you spit in my face.”

Their fight was initially scheduled to take place at UFC 178 but would get pushed back to 182 when Jones tore his meniscus in training. Jones would go on to win the fight by unanimous decision, but their rivalry wasn’t finished. At the end of the fifth round, the two got into an intense exchange, ending with Jones giving Cormier a crotch chop. After the victory, Jones would get on the mic and say, “ I don’t respect Daniel Cormier. I hope he’s somewhere crying right now. I’m sure he is.” Shockingly, it would then be revealed that Jones had tested positive for a cocaine metabolite before the fight. As this was not a banned substance out of competition, the fight was allowed to go on, but this would be the tip of the iceberg of Jones's questionable behavior. 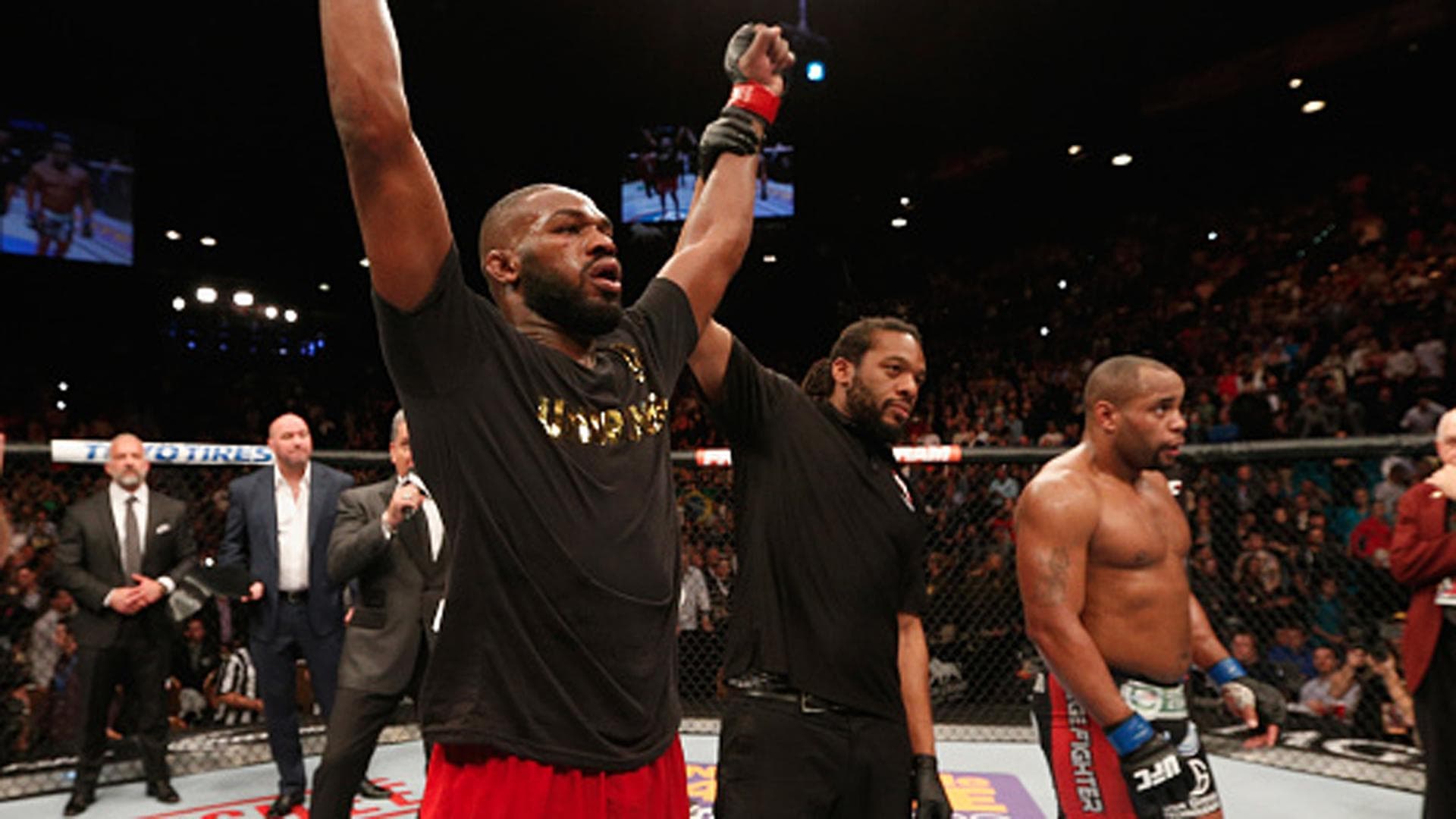 In April 2015, Jon Jones was involved in a hit-and-run accident in Albuquerque and injured a pregnant woman. According to witnesses, Jones fled the scene, only to return, grab a large amount of cash, and flee again. Upon search of Jones’ vehicle, police found marijuana paraphernalia, cash, and an oddly large amount of condoms. Following this, Jones would be stripped of his title and suspended indefinitely. Just a month later, Cormier was given a chance to fight for the vacant title against Anthony Johnson, a fight he went on to win by submission. Cormier would then defend the belt a few months later against Jones’s old foe Alexander Gustafsson before the UFC scheduled the Cormier vs. Jones rematch for UFC 197 in 2016.

Cormier would end up injuring his foot, and the fight was called off, with Jones instead fighting Ovince Saint Preux for the interim light heavyweight title. Jones would win this fight by unanimous decision, and UFC would reschedule Cormier vs. Jones 2 for UFC 200. Unfortunately, Jon Jones would not fight at UFC 200 as he tested positive for clomiphene and letrozole before the bout. Both banned substances affect your body’s production of testosterone and estrogen, with clomiphene boosting testosterone and letrozole interfering with the estrogen receptor. Due to this, Cormier would fight Anderson Silva in a non-title bout at UFC 200, and Jones was suspended for a year. 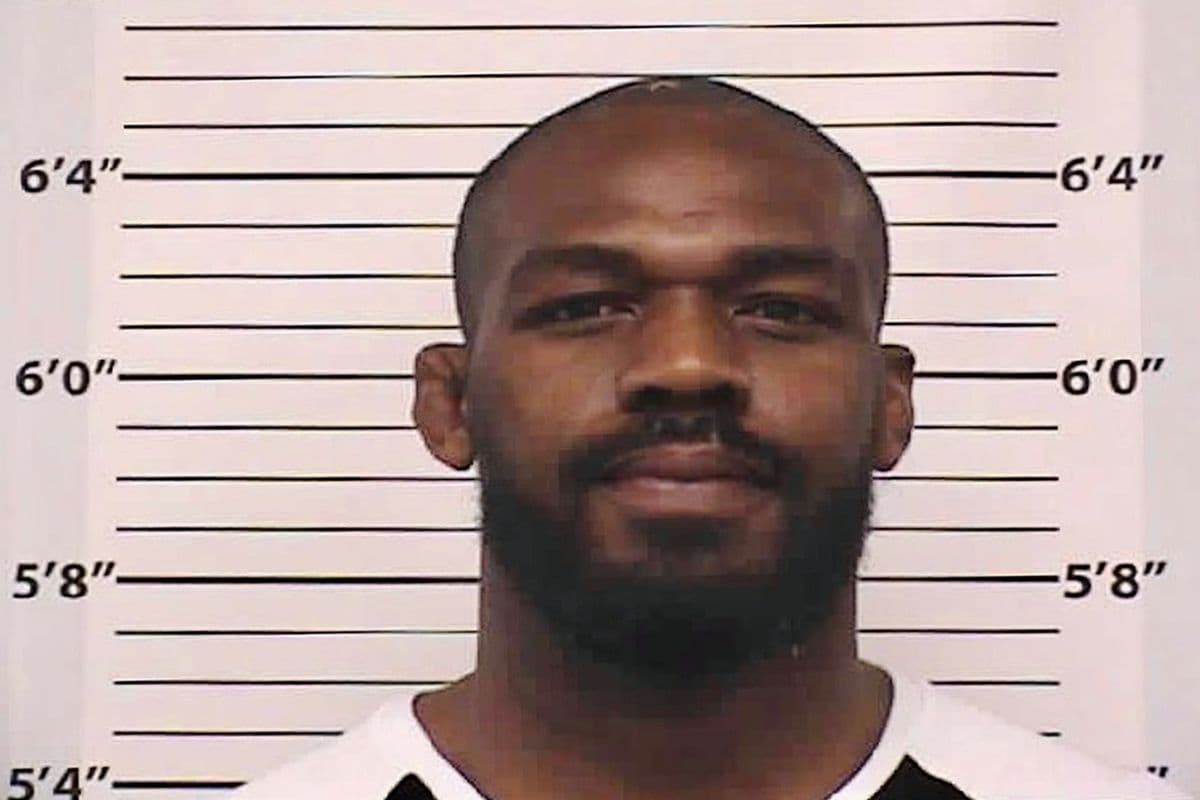 In 2017, Daniel Cormier would have one of his most infamous moments when he grabbed the towel and falsified his official weight while weighing in for his rematch with Anthony Johnson, with Jones taking issue with that on social media and calling his rival “dirty.” This would reignite their beef, and following DC’s second win over Anthony Johnson, Jones vs. Cormier would be rescheduled for UFC 214. The fight would take place this time, with Jones knocking out Cormier in the third round. After the fight, things seemed to have finally been settled, with both men being complimentary of each other and Cormier congratulating Jones on his win. Unfortunately, Jones would test positive for steroids again two weeks later. The fight was overturned to a no-contest, and Cormier was reinstated as champion. Following this, Jon Jones would face a 48-month suspension, a virtual death sentence for any top-level fighter’s career. He would end up having 30 months removed due to his supposed “substantial assistance” in finding other cheaters or steroid users in the sport. Another three months would later be removed when it was found odd that the only test Jones failed was the one he was scheduled to take, with Jones passing all his random drug tests before that. After returning from his suspension, Jon Jones would finally rematch Alexander Gustafsson for the vacant Light Heavyweight title, a bout he’d win by knockout. While Jones was suspended, Cormier would relinquish the Light Heavyweight title following one more successful defense and return to Heavyweight, where he would win and defend the championship. Daniel Cormier retired two years later in 2020, and Jones has only fought four times in four years, with his most recent bout coming in February 2020 against Dominick Reyes.