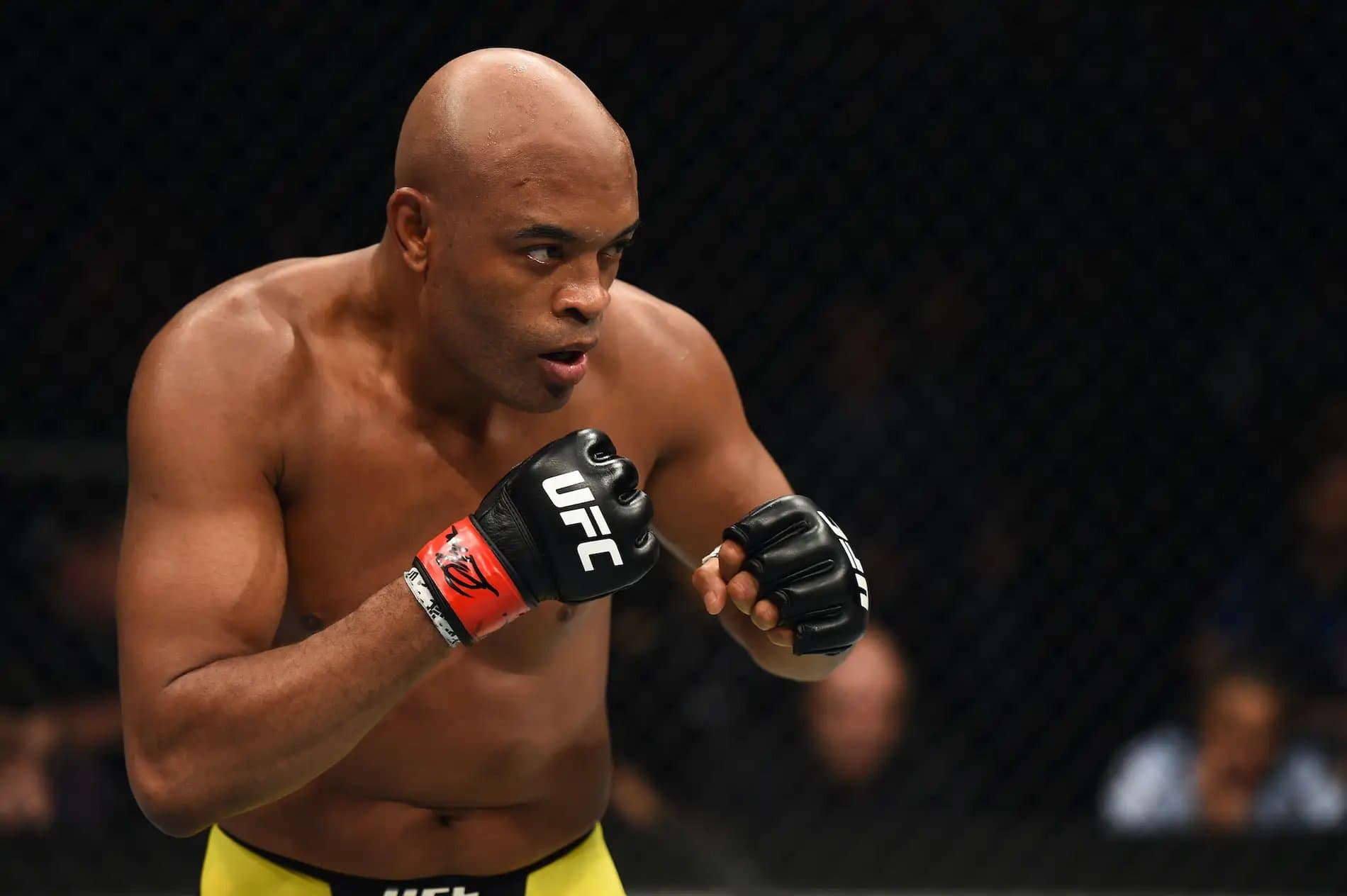 The most exciting way a competitor can win a match in combat sports is by luring their opponent into a position of dominance, resulting in a knockout or submission. Like Deontay Wilder in boxing or Gordon Ryan in jiu-jitsu, being a surging finisher is a surefire way to have the fans talking about you. In this list, we will break down some of the most impressive finishing streaks in the history of MMA and what makes these streaks so unique.

Shavkat Rakhmonov is one of the only current UFC fighters who are undefeated, with all their wins by way of finish. This impressive finish streak spans 16 consecutive fights and secured him titles in KZMMAF and M-1 Global. Rakhmonov debuted in the UFC on October 2020 and scored back-to-back submission wins over Alex Oliveira and Michel Prazeres. Rakhmonov continued this finishing streak with two Performance of the Night winning outings when he knocked out Carlston Harris with a spinning hook kick and submitted Neil Magny in his most recent bout. Shavkat Rakhmonov's record sits at 16-0 with all finishes, with 8 by knockout and 8 by submission. Shavkat Rakhmonov's next fight is scheduled to be against Geoff Neal at the first event of 2023, where he looks to score another consecutive finish to make it 17 in a row. 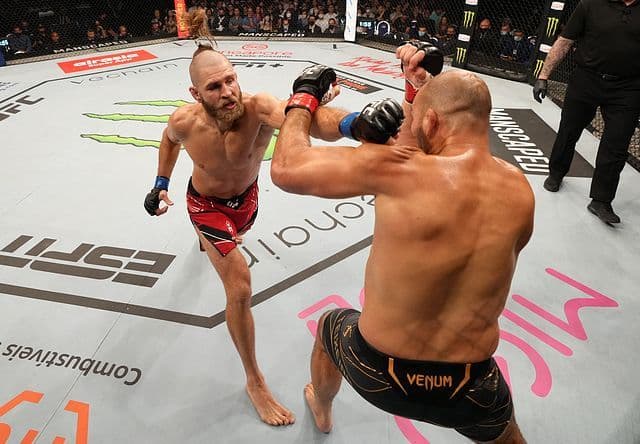 Jiří Procházka and Glover Teixeira engage in a fight of the year contender. Credit: Getty/UFC

Jiří Procházka is where the idea for this list originated. Of 29 wins, 28 are by finish, and 23 are inside the first round. Since Procházka's first decision win at Rizin World Grand Prix 2016, every fight following has been a finish. Procházka's streak currently sits at 12 stoppages in a row, with 11 knockouts and 1 submission, with wins over Bruno Cappelozza, Muhammed Lawal, Fabio Maldanado, C. B. Dolloway, Volkan Oezdemir, Dominick Reyes and most recently Glover Teixeira for the Light Heavyweight title. Procházka's next fight was initially scheduled to headline UFC 282 in a rematch with Glover Teixeira to defend his newly minted Light Heavyweight belt, but due to a shoulder injury, Procházka was forced to pull out and opted to vacate his title so as not to hold up the division. Jiří Procházka's record is currently 29-3 on a finishing streak of 12, and we, the fans, eagerly await his recovery and return. 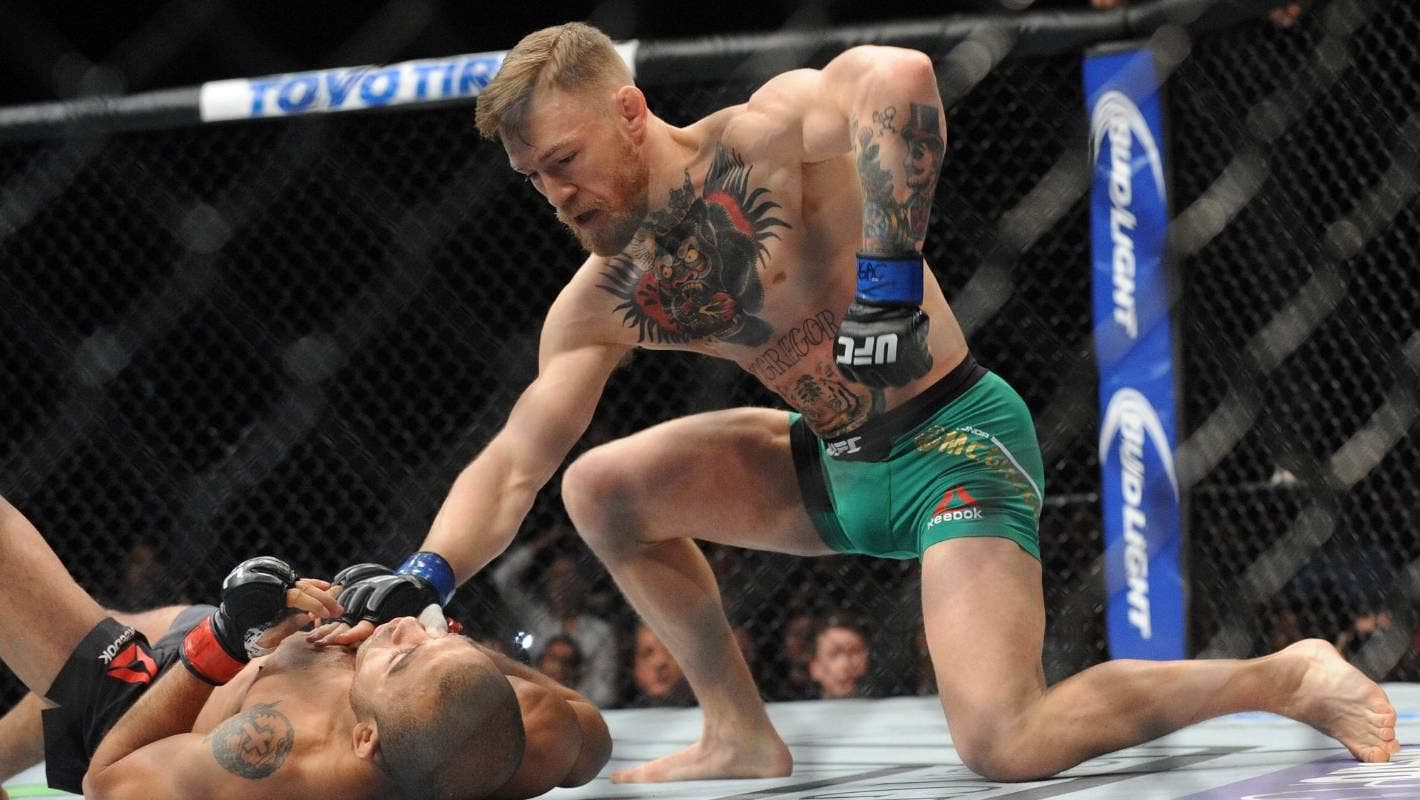 Conor McGregor's rise is one like no other. He became a UK star when fighting in Cage Warriors, scoring finish after finish to become a Cage Warriors two-division champion. The UFC quickly picked him up as they saw his vast potential, and in his first fight, he scored a Performance of the Night-winning knockout over Marcus Brimage, living up to the hype. In his second bout in the promotion, McGregor met future champion Max Holloway in the octagon and earned the first decision win of his career. After his victory over Holloway, McGregor would go on one of the most impressive knockout streaks in the UFC's history, finishing the likes of Diego Brandão, Dustin Poirier, Dennis Siver, Chad Mendes and Jose Aldo within 13 seconds to become the Featherweight champion. All the knockouts within McGregor's title-winning run would earn him bonus awards and make him the highest-selling pay-per-view draw the UFC has seen. 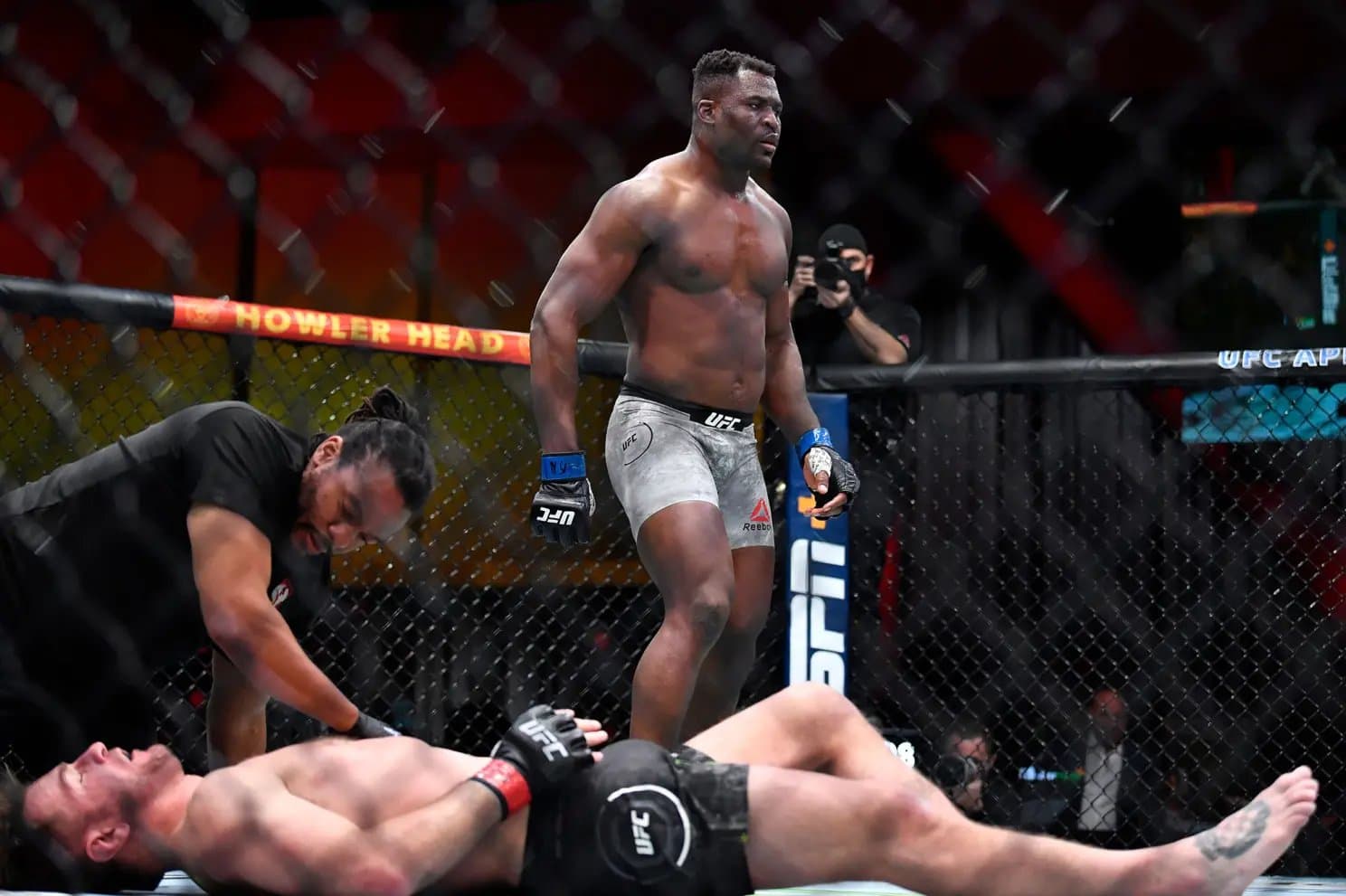 Francis Ngannou's knockout power is second to none. All but one of Ngannou's UFC wins have ended in a finish, with 8 being in the first round. Ngannou's finishing streak of 10 began after he took his first professional loss in his second MMA fight. Ngannou won 2 bouts by knockouts and 2 by submissions to earn his UFC contract and then scored 3 knockouts in a row to begin his UFC run, beating Luis Henrique, Curtis Blaydes and Bojan Mihajlović. Ngannou followed these finishes with his career's third and last submission over Anthony Hamilton, moving his finish streak to 8 with 4 in the UFC. Ngannou ended his finishing streak with back-to-back knockouts against Andrei Arlovski and Alistair Overeem to fight for the Heavyweight title in his next contest, ultimately losing by decision to Stipe Miocic and ending the streak. 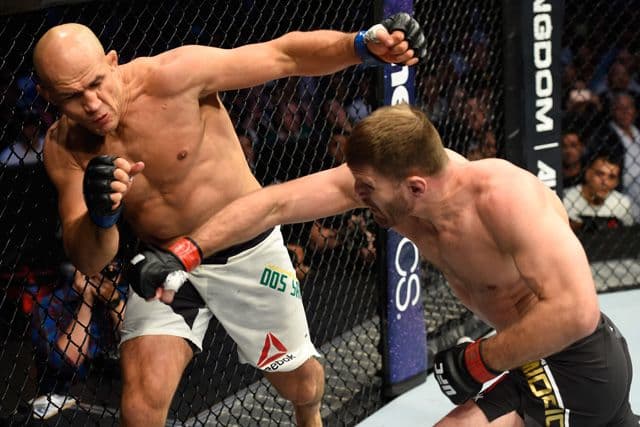 Stipe Miocic began his legendary knockout streak when he met Mark Hunt in the main event of UFC Adelaide. Miocic scored the TKO late in the fight and became one of the only men to beat Hunt by KO/TKO. Miocic followed this victory with a knockout in 54 seconds against Andrei Arlovski, earning him a Performance of the Night bonus and a title shot in the process. Miocic's next fight saw him face Fabricio Werdum for the Heavyweight title, where Miocic scored his third consecutive knockout, which led to the unforgettable moment of Miocic jumping the cage and exclaiming, "I'm a world champ!" to his team. Miocic followed this title-winning victory with 2 title defences which ended in him scoring knockouts over Alistair Overeem and Junior dos Santos to tie the record for most Heavyweight title defences. With talk of Stipe Miocic's next fight taking place against ex-Light Heavyweight champion Jon Jones, we can't wait to see what's next for Miocic.

Charles Oliveira's career resurgence is the best turnaround any MMA fighter has seen. After losing by TKO to Paul Felder in 2017, Oliveira rallied to return with 4 submissions in a row over Clay Guida, Christos Giagos, Jim Miller and David Teymur, which earned him the record for the most submission wins in UFC history. Oliveira then went back-to-back with knockouts over Nik Lentz and Jared Gordon. After these impressive finishes, Oliveira would fight in his first main event against Kevin Lee and win by guillotine choke submission in round 3. This would be the last consecutive finish in Oliveira's streak, as his next fight would be a dominant decision win over Tony Fergusson, ending his finish streak at 7, with 5 submissions and 2 knockouts. 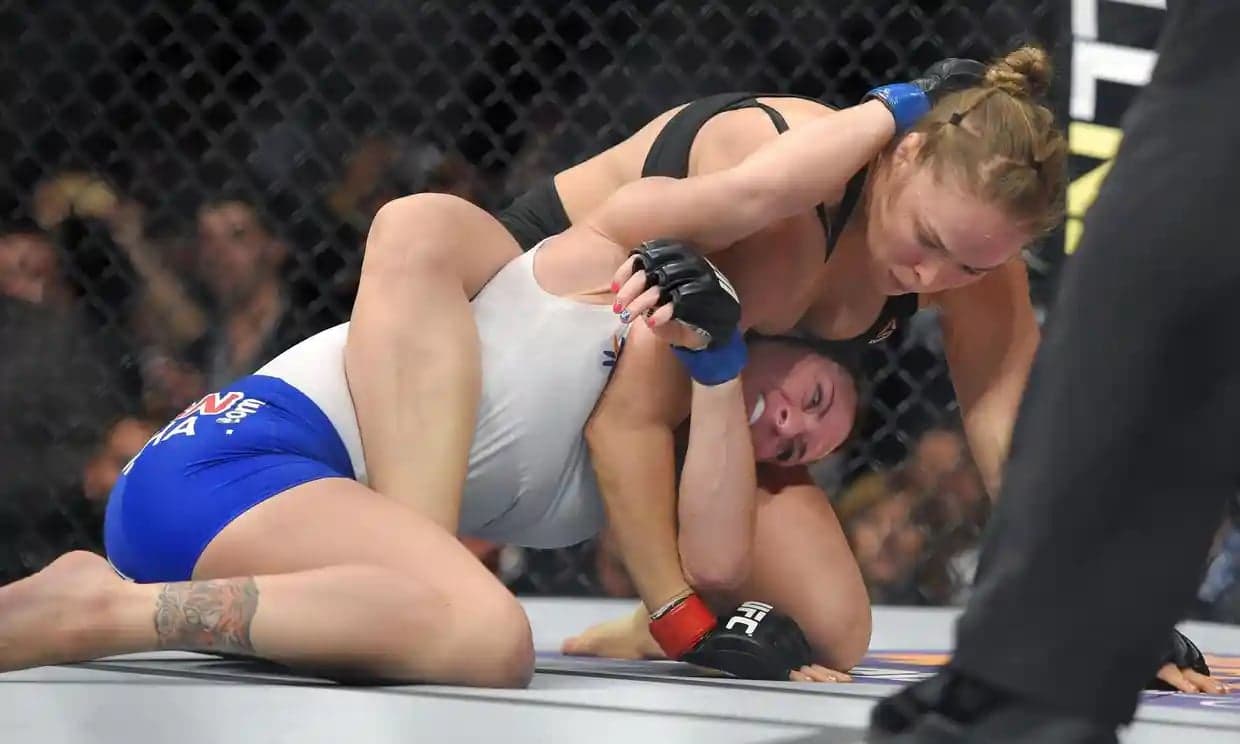 Ronda Rousey has one of the most impressive finishing records in MMA history. Rousey has never seen a judge's decision in any fight in her career. Rousey submitted Meisha Tate in her fifth professional fight to win the Strikeforce Women's Bantamweight title and was later promoted to UFC Women's Bantamweight champion after the UFC acquired and merged the promotions. Rousey earned all armbar submissions in her first 8 professional fights before scoring her first TKO over Sara McMann. Rousey went 12-0 with 6 UFC title defences, finishing every opponent, with all but one being in the first round. Rousey ended her streak when she faced Holly Holm and was knocked out in the second round, losing her title and solidifying her finish streak at 12, with 9 submissions and 3 KO/TKOs. 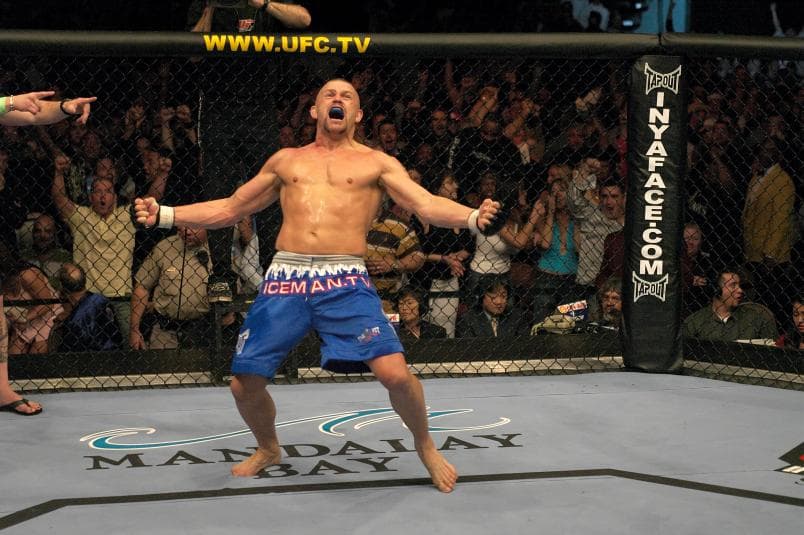 Chuck Liddell and knockouts go hand in hand. Liddell once went on a 7 in a row knockout streak which earned him the UFC Light Heavyweight title and 4 title defences. This streak began with a knockout over Tito Ortiz. Liddell followed his knockout over Tito Ortiz with a first-round knockout against Vernon White and then the 2005 Knockout of the Year against Randy Couture which won him the Light Heavyweight championship. Liddell returned with a TKO in a rematch against Jeremy Horn in his first successful title defence after losing the first time they fought. Liddell ended his streak at 7 with rematch knockouts against Randy Couture, Renato Sobral and Tito Ortiz. This finishing streak is regarded as one of the best of all time, making Liddell one of the most famous fighters in the early 2000s. 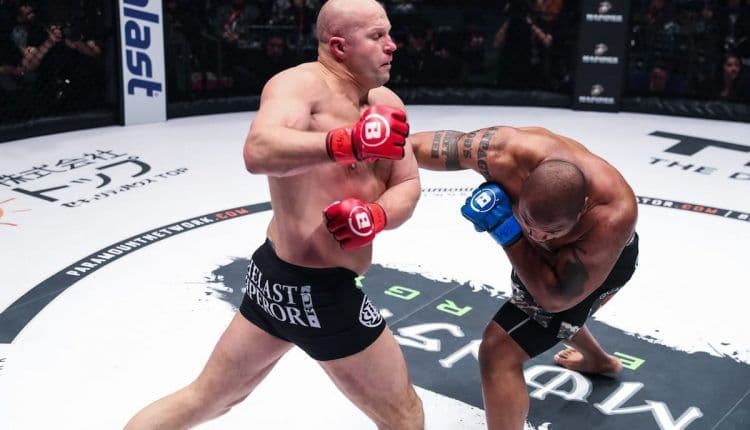 During Fedor Emelianenko's 8-year undefeated streak, he amassed 8 fights in a row that ended in a finish. Following a decision win over Mirko Cro Cop, Emelianenko scored a 26-second submission to punches over Zuluzinho. Emelianenko returned with back-to-back submissions over Mark Coleman and Mark Hunt to close out his Pride career. Now searching for more extensive tests, Emelianenko jumped to new promotions, such as BodogFIGHT and a one-off event named "Yarennoka!" where he scored 2 more submissions over Matt Lindland and Hong-man Choi. In his next 2 fights, Emelianenko would enter the Affliction promotion, where he finished 2 UFC champions, Tim Sylvia and Andrei Arlovski. The final fight in Emelianenko's finish streak would see him score a knockout in his Strikeforce debut against Brett Rogers before facing the second loss of his career at the hands of Fabricio Werdum. Emelianenko's win streak would be one of the best in history, even if he could never fight in the UFC. 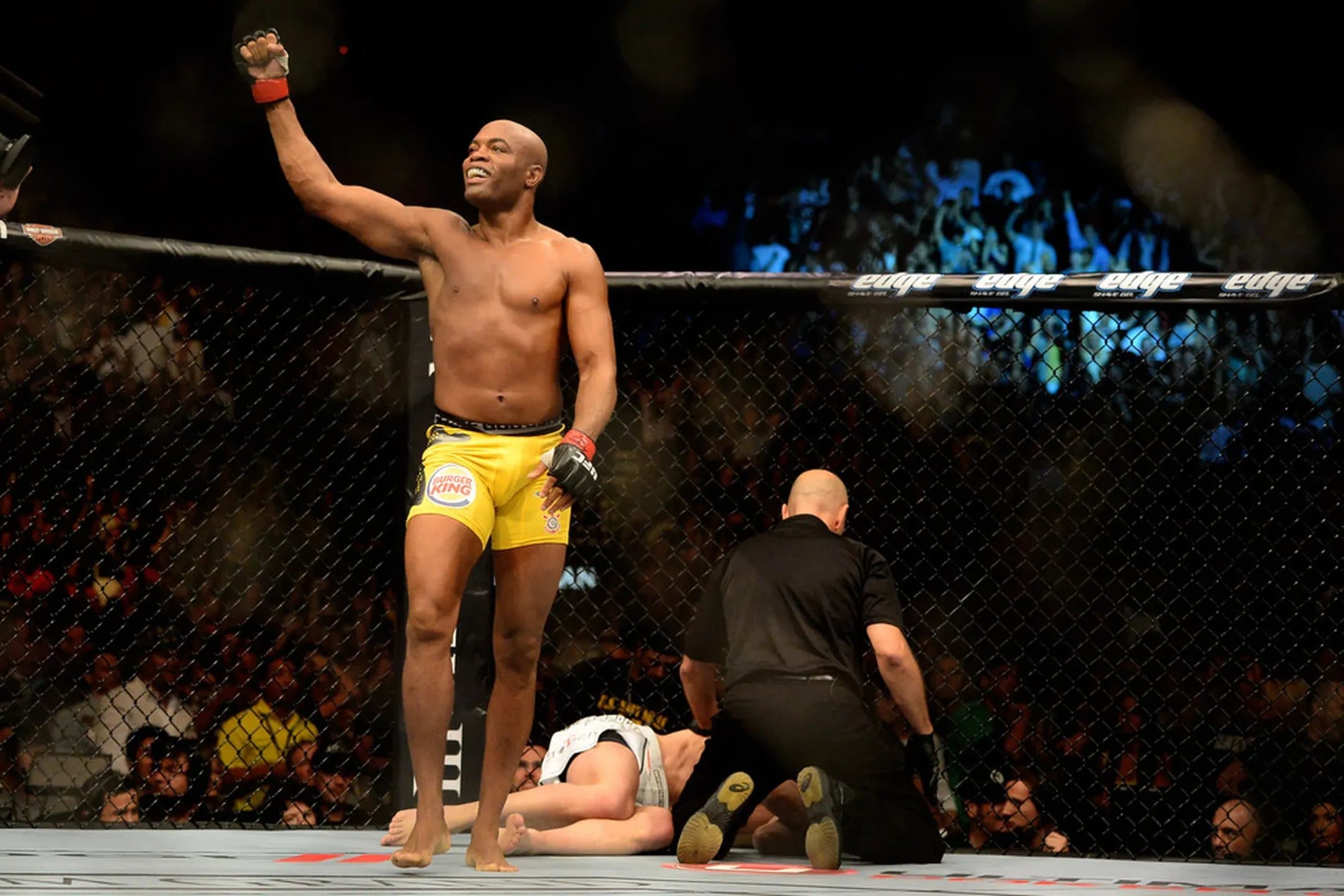 Anderson Silva has the most remarkable finishing streak by a large margin. When Silva scored an upward elbow knockout against Tony Fryklund at Cage Rage 16, he became the talk of the MMA world and began the most tremendous finishing streak in MMA history. After this fight, he was immediately signed to the UFC and put into a title eliminator against Chris Leben, whom he knocked out in 49 seconds. Silva followed up these two finishes with the biggest knockout of his career when he finished Rich Franklin to win the UFC Middleweight title. Silva closed out 2007 with three more TKOs over Travis Lutter, Nate Marquardt and Rich Franklin for the second time. Silva returned with his most significant submission victory to date when he rear-naked choked Dan Henderson in his third successful title defence. Silva's next fight saw him fight at Light Heavyweight for the first time in his career when he met James Irvin in the octagon. Silva knocked out Irvin in one minute and moved his finish streak to 8. The final consecutive finish for Silva saw him defend his Middleweight title against Patrick Côté, where he won by TKO due to a knee injury in the third round. Making it 9 finishes in a row, with 8 KO/TKOs and 1 submission.