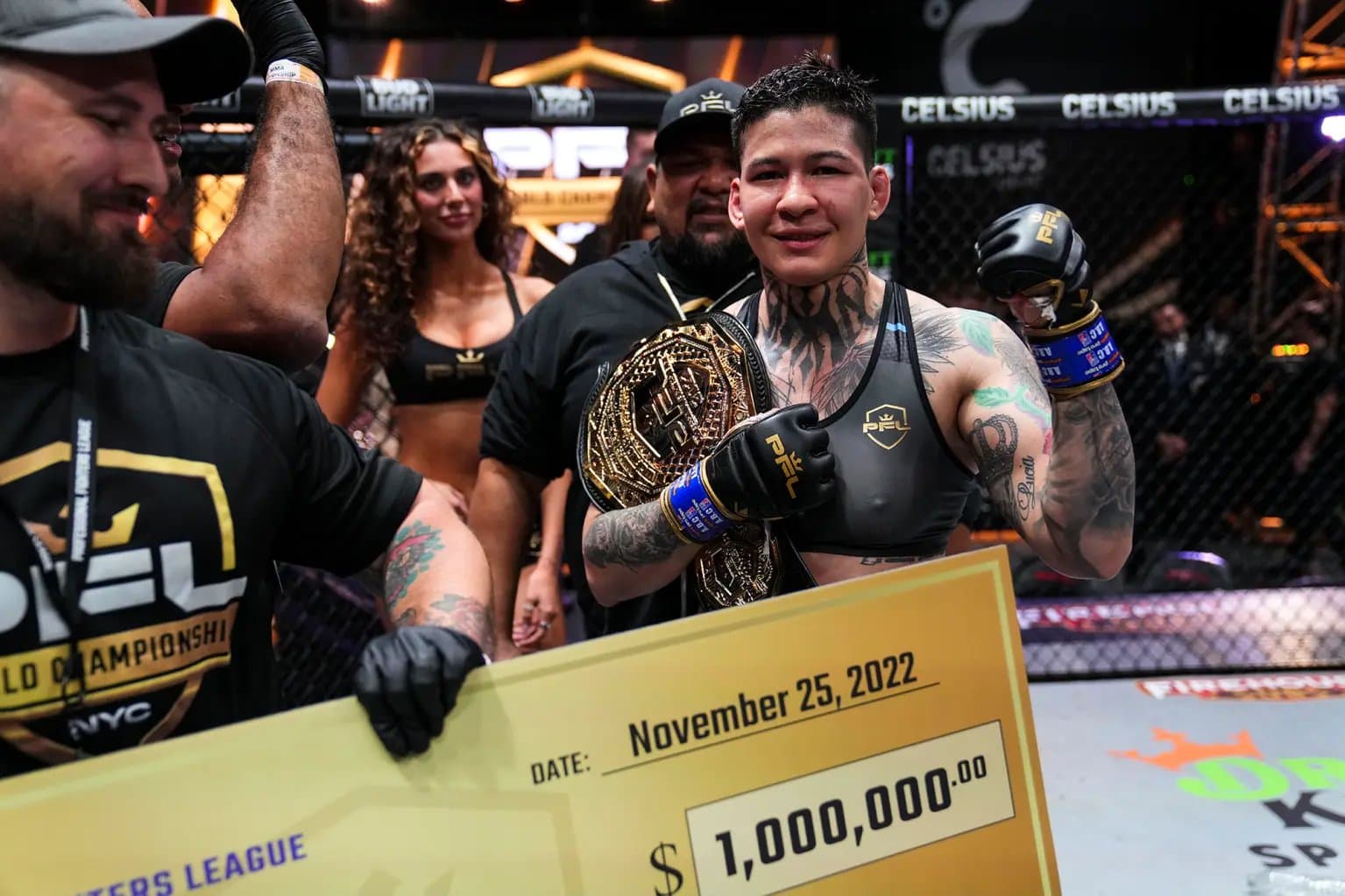 The PFL delivered, and it delivered big. The biggest night of PFL history exceeded all expectations. As a total of $6,000,000 was competed for across six fights, we all knew the stakes would be massive. So let's recap this historic event: "PFL 10: 2022 Championship". It's the biggest upset in PFL History. The undefeated 15-0 Olympic gold medalist, Kayla Harrison, was defeated by Larissa Pacheco. The first round saw Pacheco start aggressively and was quickly taken down with ease by Harrison. Harrison dominated the entirety of the round, but Pacheco showed promise landing nasty shots off her back; regardless, Kayla took the first. It seemed to be going to plan for Harrison, but the second round began, Harrison went for a takedown, but Pacheco jumped for a guillotine choke and had Harrison in the most danger she's ever faced. She survived, however, and they got back to their feet, but Pacheco wasn't done, as she landed a massive uppercut and started to flurry on Harrison. The round ended and was the first round that Harrison had ever lost in her entire career. The rest of the fight was grueling, with a seemingly exhausted Harrison eating shots on the feet and inside of Pacheco's guard. They both had their moments, but at the end of it all, Larissa Pacheco won a unanimous decision (48-47, 48-47, 48-47) and, with it, claimed the final $1,000,000 prize of the night and the Woman's Featherweight PFL Tournament belt. Incredible scenes to cap off one of, if not the greatest, PFL event. The incredible fight of the night came from the talented Featherweights Brendan Loughnane and Bubba Jenkins, with Loughnane finishing the durable Jenkins in the fourth round. It was an excellent start for Jenkins, who stunned Loughnane with some big shots in the first. Throughout the fight, Loughnane targeted the lead leg of Jenkins, which was badly swollen by the stoppage, causing Jenkins to overreach on his straight shots. Into the second round, Loughnane found his footing and started to flow, landing an extensive array of strikes, including well-timed teeps, leg kick combinations, a bullet of a right hand, and tried to time Jenkins with a head kick more than once. By the fourth round, Loughnane was beginning to take over, but Jenkins held strong behind his piston jab and attempted takedowns, but they were all stopped by Loughnane. Then, in the center of the cage, Loughnane landed a massive straight on Jenkins, which sat him down. Next, Loughnane landed some punishing ground and pound-shots, and the referee had no choice but to stop the fight. Loughnane improved to an impressive 26-4, with his only loss in PFL being a split decision to the undefeated Movlid Khaybulaev. The win over Jenkins claimed him the $1,000,000 prize and the Featherweight PFL tournament championship. Ante Delija finishing off Matheus Schefful after dropping him with a flurry of straights. Credits to: MMA Junkie Staff - MMA Junkie

If you want finishes, you bring out the Heavyweights, and that's exactly what we got in this matchup, as Ante Delija stops Matheus Scheffel in the first round, claiming his second victory and second finish over the tough Scheffel. It was an entertaining fight while it lasted, as both men stood in close range, firing shots at each other. Both men worked their jabs, with Delijas straight taking the spotlight, just outshining Scheffel's lead hook. After a takedown attempt from Delija, both men trade in the pocket again, and massive straight rocks Scheffel, and a calculated flurry drops the Brazillian, and it's all over in the first. A confident performance from Delija grants him the 4th million-dollar award of the night, and big fights are to come in 2023 for the talented Heavyweight. Julia Budd and Aspen Ladd was a skilled match that mixed all the martial arts, with Ladd claiming a split decision (29-28, 29-28, 28-29) victory over Budd. In the first, Ladd landed a crucial takedown, which allowed her to control position for the rest of the first. Off of Budd's back, she landed heavy ground and pound shots and maintained position. A moment of success was found for Budd as she reversed Ladd, but Ladd quickly swept Budd back and controlled the position for the rest. The second and third were highly contested rounds, with Budd finding great success with her Thai clinch knees and straight shots and Ladd finding success with her looping shots and wrestling attempts. At the end of the third, they fought it out, with Budd getting the better of the exchanges. However, it was not enough to sway the judges, as Aspen Ladd claimed her first victory under the PFL promotion and her first win in over three years, her last being a TKO over Yana Kunitskaya in the UFC. Ladd is looking to be a likely contender for that 2023 PFL season. Olivier Aubin-Mercier and Stevie Ray would fight it out until a spectacular knockout from Aubin-Mercier in the second. The first round was all Aubin-Mercier, as he started with heavy pressure and even heavier leg kicks, which he found massive success with, dropping Ray multiple times with them. Aubin-Mercier also found a home for his step-in right hand, which put a stamp on a successful first round for Aubin-Mercier. In the second, Aubin-Mercier threw a poorly timed head kick, which Ray capitalized on fully, catching it and slamming Aubin-Mercier to the mat. Ray took Aubin-Merciers back and worked for a submission, but the experienced Aubin-Mercier worked his way back to his feet. It wasn't long after that Aubin-Mercier landed an emphatic right hook which landed clean on Ray's chin, sending him to the canvas and forcing the referee to wave it off. With that incredible shot, Aubin-Mercier claimed the PFL Lightweight Tournament strap, $1,000,000, his 6th straight PFL victory, and his first finish under the PFL banner. 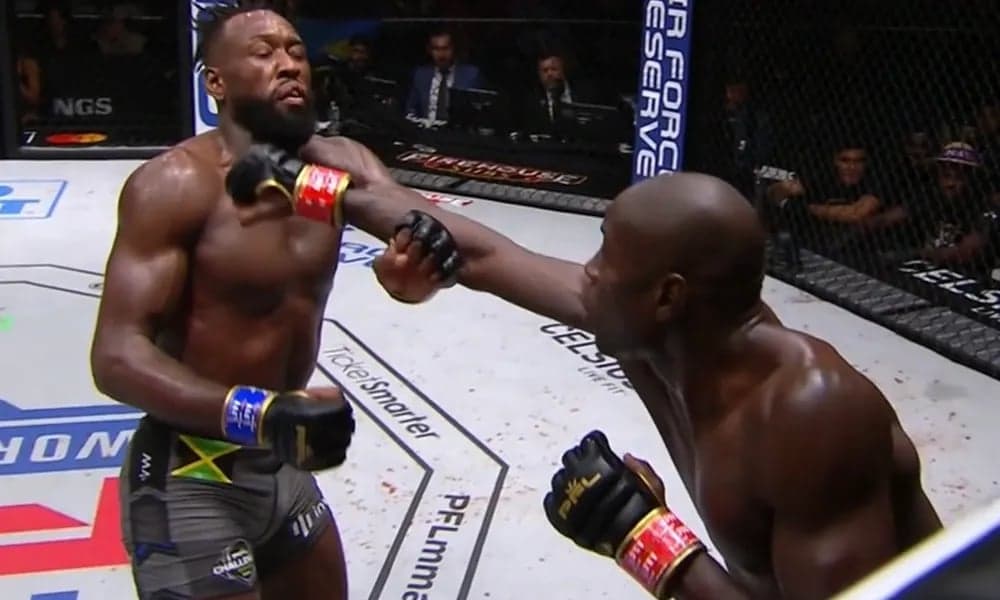 A striking lesson from the Swedish Kickboxer Sadibou Sy was on display in the second of six title fights, as he picked up a 49-46, 49-46, 49-46 unanimous decision over a game Delano Taylor. Sy started with his signature loose stance and lighting fast kicks, as Taylor attempted to pressure and take Sy down, to no avail. In the third, Sy opened up with his boxing more, landing stiff jabs and chopping up the leg of Taylor as he continued to press. The best round for Taylor was the fourth, as he relentlessly pressured and threw his jab more, looking for a big straight shot. Finally, in the fifth, Sy controlled the distance expertly, demonstrating his head movement, which was present throughout the fight. At the end of it all, Sy was the clear winner as he picked up the unanimous decision and the $1,000,000 reward, becoming the Welterweight Tournament 2022 PFL Champion. 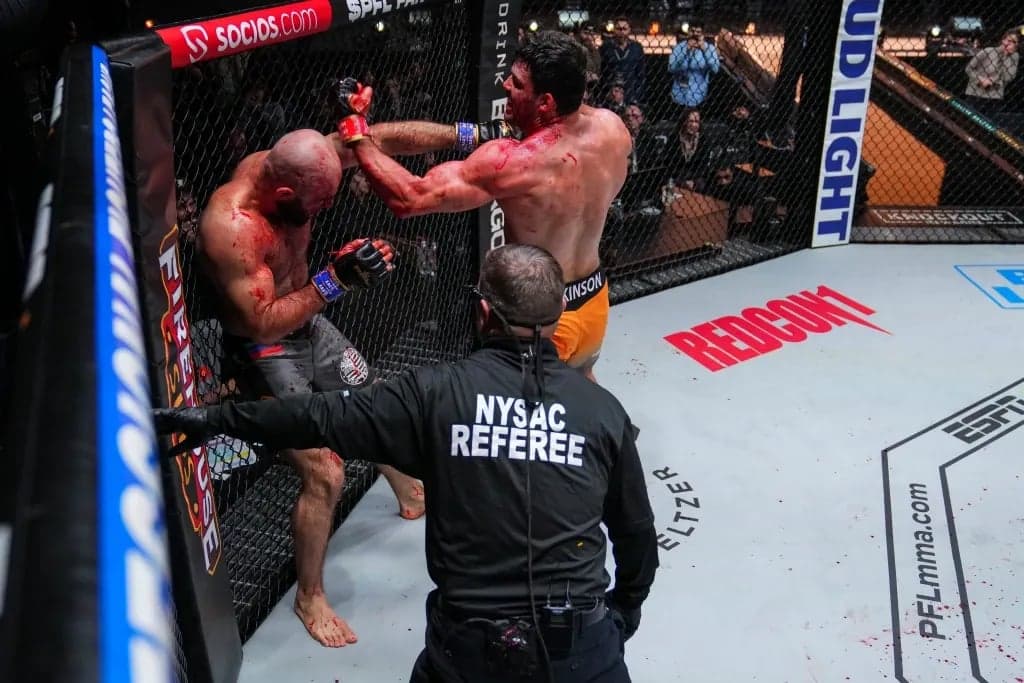 An exciting Light Heavyweight matchup between Rob Wilkinson and Omari Akhmedov started the main card with a bang, with Rob Wilkinson claiming glory and becoming the first Australian-born PFL Champion, via doctor stoppage after the second round. Wilkinson started the fight by pressuring the older Akhmedov, and a clear speed advantage was present throughout the contest. Despite this, Akhmedov had no fear of coming into the pocket, drawing Wilkinson into a slugfest at specific points and attempting to chop down the lead leg. Wilkinson found his rhythm much faster than Akhmedov and started to land his straight right and uppercuts. Wilkinson had a massive end to the first, landing flying switch knee, which dropped the slowing Akhmedov, but the veteran survived. In the second, a nasty knee was thrown by Wilkinson, causing a massive cut over Akhmedovs left eye. The doctor entered momentarily, but the fight continued. Wilkinson had an even better end to the second, flurrying with hooks, uppercuts, and knees to the head. After the second, the doctor called a stop to a dominant performance by Rob Wilkinson, as Akhmedovs cut was worsening by the minute, and Rob Wilkinson claimed his title and his well-earned $1,000,000. Wilkinson has now won 4 straight in the PFL, and all four fights by the finish; Wilkinson certainly has a bright future in the 2023 PFL Season.

As you can see, the main card did not disappoint, and as PFL closes its doors in 2022, an event as incredible as this one is only going to bring more eyes to the rising PFL, and with huge fights on the horizon, 2023 is going to be a great year for MMA.